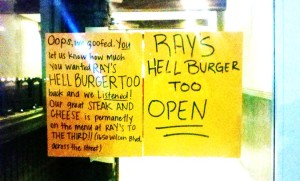 One month after opening, “Ray’s Steak and Cheese” (1713 Wilson Blvd) is no more.

The eatery, which featured a $10.99 half-pound steak and cheese sandwich, has been replaced by its predecessor, Ray’s Hell Burger Too. Owner Michael Landrum said the table service version of his famous Ray’s Hell Burger is back by popular demand.

A sign on the door (pictured) summed it up this way: “Oops, we goofed. You let us know how much you wanted Ray’s Hell Burger Too back and we listened!”

“People don’t like change,” Landrum lamented over the phone this morning, while acknowledging that the surreptitious switch to “steak and cheese” was “a little more confusing in reality than was warranted.” Although he felt that the steak and cheese sandwich was so good that it “deserved and needed its own showcase,” Landrum admitted to having some doubts when making the switch last month.

“Why mess with something that works?” he asked, rhetorically.

Landrum said the hefty steak and cheese sandwich will now be permanently placed on the menu of Ray’s to the Third, located across the street at 1650 Wilson Boulevard. In the meantime, he hopes that his loyal Ray’s Hell Burger Too customers don’t hold the ordeal against him.

“We’ve restored order and natural harmony,” he said. “Over the holiday season you hope that people have a little forgiveness in their hearts.”