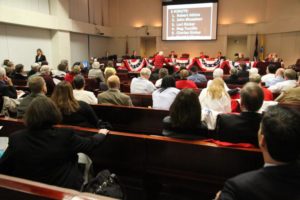 The Arlington County Board authorized the county manager to purchase a Courthouse office building last night, the first step to the creation of a new, year-round homeless shelter.

Arlington first publicly proposed the purchase of 2020 14th Street N. last month, saying that the building would help the county consolidate overflow office space, would facilitate the redevelopment of the Courthouse area, and would serve as the site of a long-desired comprehensive homeless service center. The homeless shelter would take up two floors of the seven-story building, which the county has valued at $25.5 million, and would replace the current emergency winter homeless shelter, located two blocks away.

Most of the several dozen people who spoke at last night’s marathon county board meeting stated their support for a year-round shelter. But the speakers were split between those who voiced support for 2020 14th Street being the site of that homeless shelter and a very vocal group — largely residents of the Woodbury Heights condominium, located next to the proposed shelter — who spoke out against it.

Concerns about safety and property values were the crux of the opposition to the proposed shelter.

“I just want to say that we’re not assholes… because that’s what it’s going to sound like,” said Woodbury Heights resident Meredith Fox. “I absolutely support, one million percent, helping homeless people getting full care. My issue… is safety. For any woman to enter our home, we are now going to have to walk by many [homeless] people who are standing outside.” 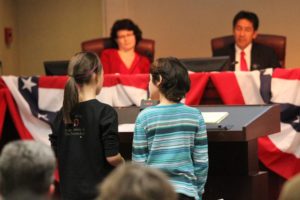 “Would you buy a [condo] right next to the homeless shelter?” asked resident Kerry Britton. “Maybe the one six blocks away looks better all of a sudden. If my property goes down 10 percent, that’s $42,000 for me and my husband.”

Britton noted that she and her self-described “NIMBY” neighbors all support the idea of a comprehensive homeless shelter — just not next to their condo.

“There are many other less expensive parts of the county where the homeless shelter and government offices can locate,” said resident Joanna Kim.

Other speakers against the shelter included a Woodbury Heights resident who broke down in tears as she described being sexually assaulted by a homeless man in a train station years earlier, and two young girls who said that, as Woodbury Heights residents, they worried about homeless individuals cursing, smoking and drinking on the street where they catch the bus to school.

“That may influence us to make poor choices later in life,” one of the girls said.

The intense opposition was counterbalanced by passionate supporters of the year-round homeless shelter, who made a strong showing at the board meeting. 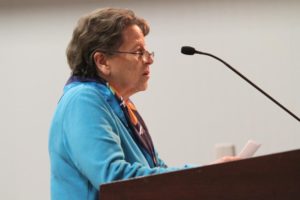 Among the pro-shelter speakers were church pastors, representatives from community groups, a real estate developer, a business improvement district director, and volunteers from the Arlington Street People’s Assistance Network. A-SPAN runs the emergency winter shelter and would run the proposed year-round shelter.

“We are poised at a moment in Arlington’s history where we have the resources and we have the opportunity to do what is right and to do what is just,” said Rev. Tim Hickey, of the Our Lady Queen of Peace Catholic Church in south Arlington. “The measure of the values of any community can be seen in how they treat and deal with one another, but most importantly in how they treat and deal with those that are most vulnerable among them.”

“No one wants the homeless living on our streets in Arlington,” said Arlington Partnership for Affordable Housing President Nina Janopaul. “It’s inhumane, and it… costs our community dearly in terms of hospitalization and jail costs. A new year round shelter and homeless service center will help our homeless transition into permanent supportive housing to lead productive lives. That’s what we all want.” 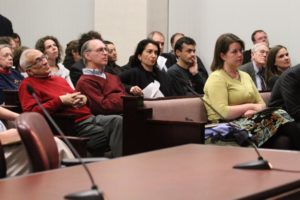 A number of speakers tried to debunk fears of increased crime from the homeless shelter — pointing our that Arlington County police headquarters is directly across the street, and that A-SPAN has a good track record in terms of mitigating impact on communities in other locations where it provides homeless services.

Several formerly homeless individuals told stories about how A-SPAN helped to turn their lives around.

“Before I entered the emergency winter shelter, I was on the streets and feeling hopeless,” said David Marand, a military veteran who served in Afghanistan. “Going through the shelter was the best thing for me, because it opened doors that I would not have been able to access on my own.”

After hours of testimony, as the clock approached 12:45 a.m., the board voted unanimously to approve the purchase. The county will now attempt to negotiate a purchase price with the building owner. If it cannot negotiate a “fair” price, the county has threatened to use its power of eminent domain to purchase the building. 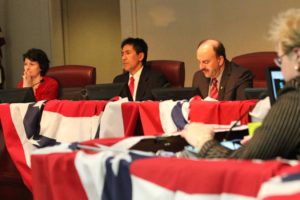 “It’s going to be a first-rate program,” County Board member Barbara Favola said of the homeless service center/shelter. “We have to be prepared to roll up our sleeves and make it work.”

Despite last night’s drama, the year-round shelter is not yet a done deal. The County Board will have to approve a special exception use permit for the shelter once the building is purchased and the shelter is ready to move in.

Jeffrey Miller, a Woodbury Heights resident, says he and other condo owners are contemplating their next move.

“We’re still gathering information, and evaluating future actions,” Miller told ARLnow.com “Remember, it was only three weeks ago that the County first unveiled this proposal. We have to determine how to address the County’s failure to consult with the neighborhood (or even to provide minimal advance notice), as well as how to pursue our substantive concerns over the proposed acquisition and usage.”

Woodbury Heights residents weren’t the only ones who opposed the building purchase. Several business owners, who rent office space in the building, spoke out against the purchase last night. The county said that existing leaseholders (with the exception of ground floor retailers and restaurants) will eventually be moved out of the building to make way for county offices and the homeless shelter. Those tenants, the county said, will be provided with relocation assistance.