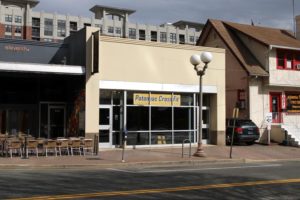 The popular Potomac Crossfit gym at 1039 N. Highland Street in Clarendon is planning to close after Jan. 28 to make way for the eventual construction of a new office building.

Potomac Crossfit owner Brian Wilson says he was just notified by his landlord that he would have to vacate the space by the end of the month, despite receiving earlier assurances that the gym would be able to stay until the spring. Wilson is planning to move staff and equipment from Potomac Crossfit, which opened in 2008, to his newer Patriot Crossfit gym near the intersection of Lee Highway and Glebe Road.

Wilson hopes loyal gym members will make the extra car trip or bus ride to Patriot Crossfit while he works to secure a new location in Clarendon. He says he’s currently in negotiations with a landlord to lease a space in Clarendon that’s even bigger than the current Potomac Crossfit space. Even if those negotiations prove successful, however, Wilson doesn’t expect the new location would open any sooner than this summer. Wilson added that he’s also in negotiations to lease spaces for crossfit gyms in the Pentagon City and Ballston neighborhoods.

The closing of Potomac Crossfit comes as a planned 300,000 square foot office development in Clarendon nears final county approval. The development — on the block bordered by Washington Boulevard, 11th Street, N. Highland Street and N. Garfield Street — is scheduled to have its site plan go before the Arlington County Board later this month. The developer, Penzance, is hoping to break ground this spring.

Most (if not all) of the other businesses on the block, including the T.A. Sullivan & Son cemetery monument business, are also expected to close as the groundbreaking nears.