New details have been released about a major office development in Clarendon.

The development, Penzance says in a press release, is consistent with the Clarendon Sector Plan.

Penzance has completed the preliminary 4.1 site plan filing review process and is submitting this week its final filing with Arlington County for a 300,000 square foot office development in the bustling community of Clarendon. The project is bounded by N. Washington Boulevard, N. Garfield Street, N. Highland Street and N. 11th Street and has two addresses, 3001 and 3003 Washington Boulevard. The parcels that comprise the site were assembled by Penzance over the last few years.

“3001-3003 N. Washington Boulevard will be an important addition to both the vibrant Clarendon community and the R-B corridor,” said Victor K. Tolkan, Penzance managing partner and founder.

“Working with the architecture firm, Noritake Associates, our team has created a development that provides welcome commercial office with ground floor retail space in a predominately high-rise residential area to reinforce Clarendon’s status as a true live-work-play urban environment. The project conforms to the Arlington County Clarendon Sector Plan that calls for a building that steps back from N. Washington Boulevard and N. Highland Streets as well as maintaining and restoring two existing building facades identified by the sector plan to be preserved. The building design allows for a wide range of floorplate options for our potential tenants. Situated in the heart of Clarendon’s commercial district, this project will add to the vitality of what has long been Arlington’s ‘downtown’,” said Tolkan.

Penzance has demonstrated its commitment to Arlington County for many years, owning and managing 1500 Wilson Boulevard in Rosslyn, 2000 N. 14th Street in Courthouse and developing in 2003, and owning and managing Ballston Gateway (3865 Wilson Boulevard), a 2010 TOBY award winner. The company also plays a leadership role in the County’s urban arts center, Artisphere, through its active involvement in the Rosslyn BID.

Another rendering of the new buildings, after the jump. 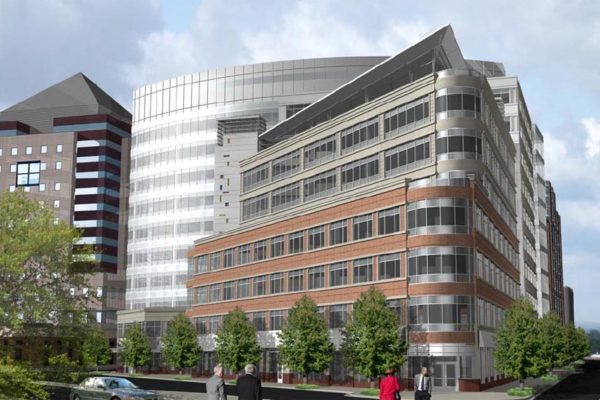