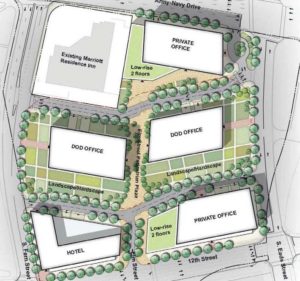 A proposed development that could bring more than 2 million square feet of new office and hotel space to Pentagon City has entered the site plan review process.

The first of several expected Arlington Site Plan Review Committee meetings on the so-called PenPlace project was held last night at county government headquarters in Courthouse. The meeting was standing room only as interested community members packed the small audience area to observe the hour-and-a-half-long proceedings.

The proposed building heights vary from 139 feet for the hotel to 291 feet — or 18-22 stories — for two of the office buildings.

The proposal includes the creation of four new streets that will help improve vehicle accessibility — including an extension of S. Elm Street from the adjacent Metropolitan Park residential project and an extension of 12th Street S. from Eads Street to Fern Street. County staff have expressed interest in approving ground floor retail space along the proposed stretch of 12th Street.

The Arlington County Board is not expected to consider the project any earlier than June, but the plan is already facing an uphill battle as it advances toward Board consideration. Members of local neighborhood groups, like the Arlington Ridge  Civic Association, have expressed concerns about building heights and additional traffic generated by the new office buildings. Last night some Site Plan Review Committee members also expressed skepticism about the project as proposed.