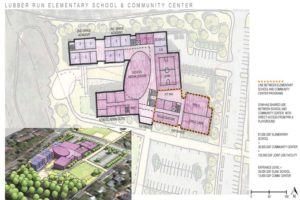 The public meeting is being held from 7:00 to 8:30 p.m. at Kenmore Middle School (200 S. Carlin Springs Road). School officials are expected to discuss the dozens of building options they’re considering in an effort to address the school system’s capacity crisis.

Officials have proposed adding 7,000 seats to the school system over the next 10 years to address the growth of Arlington’s K-12 student population. According to APS projections presented to parents on Feb. 8, school enrollment is expected to continue to grow from 21,519 in 2011 to approximately 30,000 in 2021 (excluding alternative education programs). 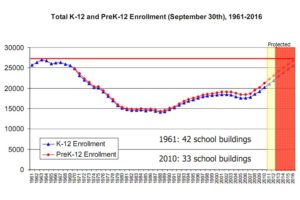 Systemwide, APS says their current student capacity is 22,953, and they’ve “pretty much exhausted all our avenues” for adding additional capacity in existing school buildings. In the near-term, capacity will be added through relocatable (trailer) classrooms. To keep up with the burgeoning student body, APS wants to add 3,000 elementary school seats, 2,500 middle school seats and 1,500 high school seats.

The school system has created a list of 60 options for building new schools or making additions to existing schools. The list includes several options for each of 18 sites around the county. Among the likely options are a new 25-classroom “Lubber Run Elementary School” (above) near Barrett Elementary, an eight classroom addition to Ashlawn Elementary, and an elementary school addition to the Reed School in Westover.

In the coming months APS will be analyzing the options, gathering community input, and refining an “option set” that groups multiple options into a coherent Capital Improvement Plan. Option sets are expected to be discussed at a School Board work session in mid-March.