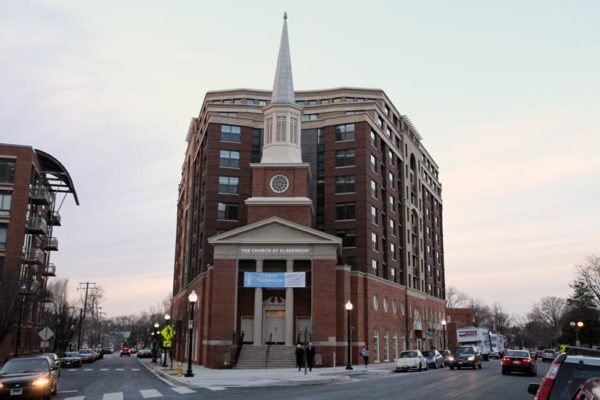 After two nomadic years, the congregation of The Church at Clarendon (1210 N. Highland Street) is getting ready to return to their newly-renovated church sanctuary.

Since construction began in late 2009, the congregation has been meeting in venues like Rosslyn’s Top of the Town conference facility and at the First Baptist Church of Ballston. Starting on March 4, they’ll be back home.

Rev. David Perdue, the church’s Interim Senior Pastor, says he’s hoping to not only welcome back those who have stuck with the church through the construction, but to attract new, younger worshipers who might have moved to the area in the intervening years.

“We’re reintroducing ourselves to the community,” Rev. Perdue said. “We’re prepared to receive visitors and let them know: this is who we are.”

The journey to the church’s upcoming homecoming, however, has been a bumpy one. Founded in 1909 as the Clarendon Baptist Church, the church had its heyday in the 1950s and 60s, when up to 2,000 congregants would pack the pews for Sunday services.

The congregation started to wane in the 1970s, and by the 2002 Sunday attendance was consistently dipping below 100. Faced with an aging congregation, a large, aging building, costly needed repairs and utility bills that exceeded $100,000 per year, church leaders took bold action. They hired Rev. Perdue, who formed a younger, more contemporary congregation to supplement the older, traditional congregation, and then struck a deal with Arlington County and a nonprofit developer.

The church sold its “air rights” to the developer for $5.6 million. The developer, in turn, would build an eight-story affordable apartment building — to be called “The Views at Clarendon” — while renovating the two story church below it. It seemed like a win-win: 70 affordable apartments would be added to the Clarendon area (in addition to 46 market-rate apartments), while the church was saved from potential financial ruin.

But the deal would prove to be controversial. Neighbors in Lyon Village sued to block the planned 10-story church/apartment complex, citing separation of church and state and the steep per-unit cost of the subsidized affordable apartments. In the end the lawsuit was dismissed and construction proceed as planned.

Rev. Perdue is hoping to heal any remaining hard feelings.

“If there’s a way for us to promote some healing… we’d be all for that,” he said.

To promote the homecoming, church members marched in last night’s Clarendon Mardi Gras parade and are planning on handing out flyers at the Clarendon Metro station on Friday, March 2 and Saturday, March 3. They’re also hoping to attract residents from the new apartments above the church, which started leasing in December. Residents are welcome to come downstairs and attend services in their pajamas, Rev. Perdue said.

“There’s no dress code,” he noted.