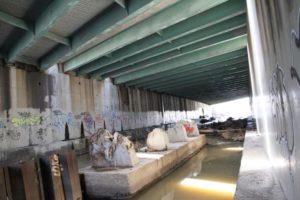 (Updated at 5:10 p.m.) Dangerous gaps still remain between the I-395 bridges that run over Four Mile Run, near Shirlington.

Virginia Department of Transportation officials say they’re waiting for the results of a state police investigation into the death of Alexandria paramedic Joshua Weissman before deciding what to do about the gaps. As of today the investigation is “still ongoing,” according to Virginia State Police spokeswoman Corinne Geller.

Weissman fell through one of the gaps while trying to reach a burning vehicle in the HOV lanes of I-395 on Feb. 8. He fell some 20 to 30 feet into the creek and was knocked unconscious, authorities said at the time. Weissman later succumbed to his injuries in the hospital.

From below, the two gaps are clearly visible between the mainline of northbound I-395, an HOV ramp, and the HOV lanes themselves. Beneath the gaps are the Four Mile Run bike trail, a rocky berm littered with debris from the homeless individuals who sleep under the bike trail, and a shallow section of Four Mile Run with a jagged concrete structure in the middle.

The gaps pose the biggest danger to police and firefighters, who often will reach an incident in the HOV lanes via the mainline of I-395. If the incident happens to be on the bridge, as it was in the case of the Feb. 8 car fire, those public safety personnel will have to either hurdle over the gap or walk around it, in order to reach the scene and come to the aid of the victims.

One police official tells ARLnow.com said the gaps are “really not a problem in daylight” but can be especially dangerous at night. There are other gaps between lanes along I-395, including in the area of S. Joyce Street in Pentagon City, the official said, adding that he’s personally aware of at least two close calls involving officers nearly falling through the gaps.

Arlington County Fire Chief James Schwartz says that placing a grate between the spans may help eliminate the danger.

“It seemed to me that something like a grating… might be a cheap and adequate solution to that problem,” Schwartz said. He added, though, that it “makes sense” for state police to conclude the investigation before “rushing out to do something that in the end might not be a complete solution.”