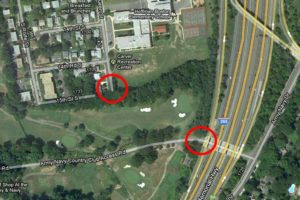 Bicyclists hoping for a new way to get from Columbia Pike to Pentagon City without having to navigate the tricky eastern end of the Pike will have to keep waiting. A plan to build a bike and pedestrian path from the Arlington View neighborhood to Army Navy Drive is still on hold until additional engineering plans and project funding can be procured.

In June 2010, the Arlington County Board approved a plan for Army Navy County Club to build a new four-story clubhouse. As part of the approval process, the club agreed to grant the county an easement which would allow a 30-foot-wide emergency access road and bike/pedestrian path to be built from S. Queen Street, near Hoffman-Boston Elementary, to the I-395 underpass that leads from Army Navy Drive to the club.

The primary motivation for the new road, county officials emphasized, is a need for more north-south connections across I-395 for emergency vehicles. 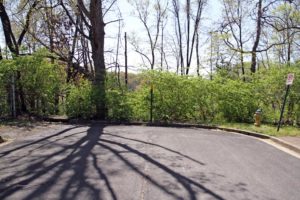 “There are very few places along the 395 corridor in Arlington where we actually have an underpass, or a way to get from one site of the highway to another without going through an interchange,” says Arlington County Director of Transportation Dennis Leach. “So it’s incredibly valuable…. for emergency response purposes.”

As a side benefit, though, Leach said the path will be “a real benefit to the community” in terms of providing better access for cyclists and pedestrians.

Despite the positives, the project hasn’t gone very far. First, Leach says, more detailed engineering plans need to be drawn up. Then funding needs to be procured through the county’s Capital Improvement Plan and bond referendum process. An early engineering study, conducted in 2010, suggested that the project would require very high retaining walls to compensate for the steep hill the access facility must run along. The cost of such a construction project was expected to exceed $3 million, we’re told.

Leach declined to speculate as to when the access road might eventually be built. He also declined to comment about a 2010 lawsuit filed by disgruntled members of Army Navy Country Club who objected to a bike path being built along one of the holes at their golf course.

A call to Army Navy Country Club for comment was not returned. The club’s then-general manager, who wrote a letter to the editor in support of the emergency access and bike path in 2010, is no longer employed at the club, according to a woman who answered the phone there.