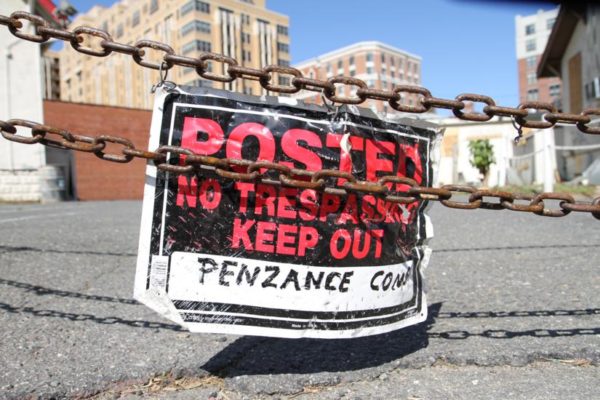 About a month from now, in early May, a groundbreaking is expected to be held for a new 280,000 square foot mixed-use office project in Clarendon.

In the meantime, the block on which the project will be built (3001-3003 Washington Boulevard) is looking more and more like a ghost town.

Chains and “no trespassing” have gone up around the block. The former BB&T Bank has been boarded up, as has the former Eleventh Street Lounge and Potomac Crossfit locations. The block’s long-time stalwart, T.A. Sullivan and Son cemetery monuments, now has a sign outside announcing its new location, in Vienna, and thanking the community “for allowing us to serve you for more than 100 years.”

BB&T Bank, meanwhile, also has a new location. The bank branch has moved into the old PNC Bank space at 3033 Wilson Boulevard, near the Clarendon Metro station.

The office project’s developer, Penzance, says it expects to wrap up construction in “early 2014.”