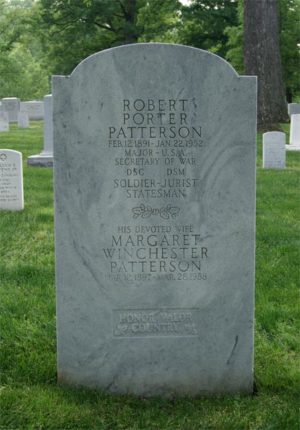 An old gravestone of former Secretary of War Robert Porter Patterson is still propped up against a building in a construction site in Clarendon.

Since we first reported on the gravestone last week, we’ve learned that it is a private cemetery marker that was apparently removed from Arlington National Cemetery after a new headstone was put in place following the 1988 death of Patterson’s wife. (See photo of current gravestone, left.)

In a statement, Arlington National Cemetery said it is not responsible for the handling of private headstones.

Patterson was a World War I veteran who later served as a top military official during World War II and as Secretary of War immediately following the conflict. He died in a plane crash in 1952 and was given a Combined Services Full Honor Funeral, as documented in the book The Last Salute.

As of last night, Patterson’s weathered gravestone was still visible from the sidewalk along 11th Street N., within the Penzance office project construction site. A groundbreaking ceremony was held at the site today.

The now-shuttered T.A. Sullivan and Son cemetery monument business is located within the site, but ARLnow.com has been unable to reach anyone associated with the business.