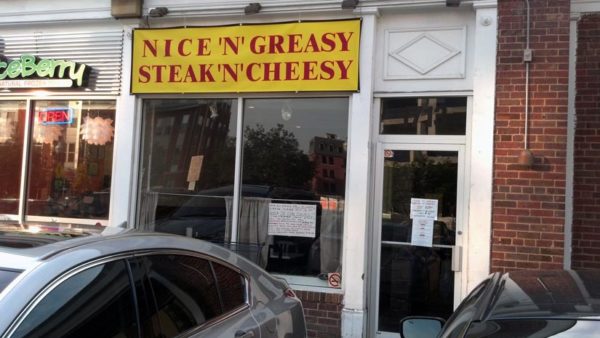 Yesterday (May 30) the Michael Landrum-owned eatery at 1713 Wilson Boulevard in Rosslyn changed identities again — to “Nice ‘N’ Greasy Steak ‘N’ Cheesy.” Nothing about the interior has changed, except the menu.

The menu of the new restaurant include three entrees, two sides, and a curated selection of soda, beer and wine. Two of the entrees are steak and cheese sandwiches: the $7.99 “Shock G” — one-third pound of sliced rib-eye, a generous helping of American and Provolone cheeses and grilled onions on a toasted 8-inch Lyon Bakery sub roll — and the $11.99 “Biggie,” which is the same as the Shock G but with two-thirds of a pound of rib-eye.

Sides at Nice ‘N’ Greasy Steak ‘N’ Cheesy are greasy, but not cheesy. The two sides offered are tater tots and onion fries, both $2.50.

The eight beers on the menu include Budweiser and Bud Light ($3), Bells Oberon ($4) and Lucifer ($6). The house wine (pinot grigio, merlot and cabernet) is offered at $4.

Update at 3:05 p.m. — In an email to ARLnow.com, owner Michael Landrum explains that he never gave up on the idea of running a steak and cheese-focused eatery.

“I never truly abandoned it,” Landrum said. “In fact, originally, I was so excited to do the steak and cheese joint that I rushed it out a little too early as soon as Ray’s To The Third opened. Now I am a bit better prepared and have fine-tuned our offerings a bit.”

“The magical “Groove Grease” is, and will remain, a secret — except to say that it was inspired by the amazing Jimmy McGriff album of the same name (warning, cover art not suitable for work or minors),” Landrum said. 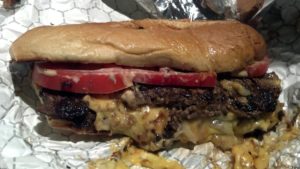 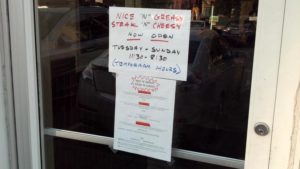