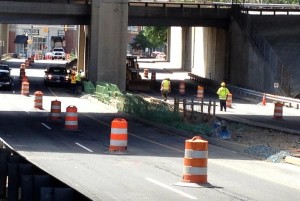 The section of S. Joyce Street that connects Columbia Pike and Pentagon City is getting a major facelift.

Road work is currently underway on S. Joyce Street, described as “one of the few places for cyclists and pedestrians to cross I-395 in Arlington.” The $1.8 million federal project will not only improve the aesthetics of the road — “more urban, and less highway-industrial” — but will result in significant functional improvements for road users, especially pedestrians and cyclists.

Among the changes, as described by the Federal Highway Administration:

Construction is underway now and is expected to wrap up in September. The project also accounts for the planned Columbia Pike streetcar, anticipating that the streetcar will use the road’s inner lanes.