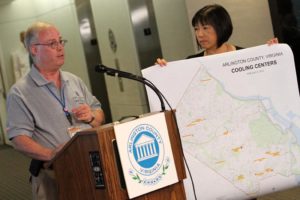 The director of Arlington’s Office of Emergency Management (OEM) says the county and utility companies are “making slow and steady progress” in the cleanup and recovery efforts following Friday night’s storm.

At a press conference today, OEM Director Jack Brown told reporters that Dominion is making “yeoman strides” to restore power to tens of thousands of Arlington residents. Despite the widespread power outages — 26,997 Dominion customers were without power as of 12:45 p.m., down from 68,000 Friday night — Brown said there has so far been no loss of life as a result of heat following the storm.

“It is a matter of priorities,” Brown said. “Eventually Dominion will get to the neighborhoods.”

Brown said power has been restored to most critical county infrastructure, but noted that Culpepper Garden, home to 276 low- and moderate-income Arlington seniors, is running on generator power and currently does not have air conditioning. The seniors are being kept in the facility for now while Dominion is being asked to prioritize power restoration to the facility, Brown said.

Brown encouraged residents who don’t have power to go to the county’s 16 cooling centers, its shopping malls, or its community pools. Arlington has set up a 24-hour drop-in cooling center at the Walter Reed Community Center (2909 16th Street S.). Daytime cooling centers include other Arlington community centers and libraries, as well as the Ballston and Pentagon City malls. Currently the Yorktown and Wakefield high school community pools are open, while the Washington-Lee pool has closed due to a lack of water pressure. 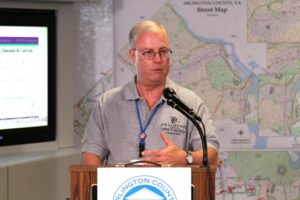 The county is asking residents to bring elderly and disabled neighbors to cooling centers, if need be.

“We need to pull together,” Brown said. “This event could last for several days, possibly a couple of weeks. Let’s check on your neighbors. It’s really about neighbors helping neighbors. Volunteer to transport those in need to county cooling centers.”

Brown said that all major county thoroughfares are open, although 19 county road remain blocked by storm debris. A dozen county crews are working to clear the debris, and debris pickup is expected to continue for the next 2-3 weeks, Brown said. Meanwhile, 39 traffic signals are still dark this afternoon (down from a peak of 96) because of power outages. Citing last night’s fatal pedestrian accident, Brown encouraged motorists to drive carefully on county streets.

Brown said 911 service “remains spotty” in Arlington. He said residents who want to report an emergency should first try 911, then the county non-emergency number at 703-558-2222, then — if all else fails — seek help at the nearest fire station.

Verizon provides the Arlington’s 911 infrastructure and Brown said the county is going to investigate what went wrong.

“The county is going to conduct a thorough investigation of what happened to our 911 system… so we don’t have a repeat of this in the future,” he said. So far, he said, there have been no reports of anybody suffering serious consequences as a result of a delay in response due to a 911 failure.

Brown said that other county communications infrastructure has performed well. Despite some disruptions in the hours following the storm, Brown said cell phone service has been one of the county’s most reliable forms of communication. He noted, however, that the county’s radio systems did not suffer any outages as a result of the storm. Brown also said that RACES, the county’s emergency amateur radio network, was activated over the weekend.

All in all, Brown said he’s pleased with the response to the storm so far.

“The county’s resources have been stretched very thin,” Brown said. “I think we’ve done a good job of responding.”

END_OF_DOCUMENT_TOKEN_TO_BE_REPLACED

More Stories
Morning Poll: Taking Time Off for Independence Day?HOV Restrictions Lifted On I-66 Through Tuesday