The move, to a bigger space at 5818 Seminary Road in Falls Church, will allow the five-year-old business to serve as a dedicated pet adoption center, says owner Ryan Folcher.

The current space, just off of Columbia Pike, allows only for standalone pet adoption events, said Folcher, who also cited concerns about Arlington County’s move away from the type of light industrial zoning his business uses. 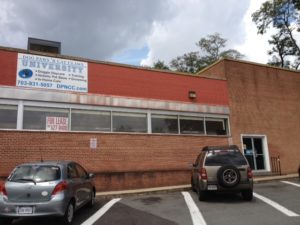 “We want to kind of reconstruct the building. But I don’t have the money or time to do that and risk that Arlington just says, ‘No, we’re not going to approve it,'” Folcher said. “The only thing that is zoned for Arlington is high-rise apartments and condos. I was interested in staying but my business model really can’t adopt. Financially, I just need to let the business evolve and that’s not where it’s going to happen.”

Daycare manager Lisa Niel said the current space holds between 50 and 60 dogs a day. Folcher and another employee showed off the new 7,400-square-foot daycare and retail store to clients in an open house on Sunday.

“We’ve already heard feedback from clients dropping off dogs that they love the new space,” Niel said. “We think it will broaden our client base into Alexandria, Bailey’s Crossroads and Fairfax.”

He hopes to have the new location ready to open by late August.