The Arlington County Board has approved a new 24-story office building in Crystal City — a building that’s being billed as a catalyst for Crystal City’s revitalization.

At 24 stories and 719,704 square feet, the building — 1900 Crystal Drive — will be second only to the Pentagon in Arlington in terms of floor space.

(Alhough 1900 Crystal Drive will be the tallest in Crystal City, the 580,000 square foot, 35-story office building currently under construction at 1812 N. Moore Street in Rosslyn is still expected to be the tallest countywide.)

The building includes 11,290 square feet of ground floor retail space, plus a five-level, 732 space parking garage and nearly 150 bicycle parking spaces. Vehicle parking will be available to the public on weekends, holidays and after 6:00 p.m. on weekdays. Some residents expressed concern about extra vehicular traffic as a result of the building, but it won approval from the county’s Transportation Commission by a vote of 9-0.

Vornado, the developer of 1900 Crystal Drive, agreed to a number of community benefits in exchange for the extra zoning density required for the project. Among the benefits:

Though resident concerns about the building were largely assuaged, thanks to the addition of low-reflection glass and a 900 square foot community meeting room, Board member Chris Zimmerman voted against the project. (It passed 4-1.)

Zimmerman said that the community benefits associated with the project were relatively small for a building of its size, but ultimately his ‘no’ vote came down to his view that the building’s site plan does not pave a sure-fire path to the construction of a proposed, adjacent “Center Park.” Instead, the site plan just requires Vornado to work with county staff “to prepare an implementation plan for guiding the achievement of Center Park.” 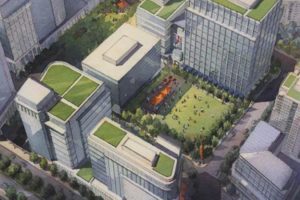 “It should not be overlooked that there are tremendous concessions being made [to the developer],” Zimmerman said. “For the amount of bonus density being added to this site, the benefits package has been minimized, while the building has been maximized.”

Located at the corner of 20th Street and the future, realigned Clark-Bell Street, the nearly 75,000 square foot Center Park is one of the centerpiece goals of the Crystal City Sector Plan.

1900 Crystal Drive is the first project to utilize the framework outlined in the sector plan, which was approved in 2010. County officials lauded the building as an important, precedent-setting first step in the modernization and revitalization of Crystal City following the loss of numerous military offices as a result of BRAC.

“Looking at the Crystal City community benefits that are being provided, the great value of this building is that it really does commence the redevelopment of Crystal City as recommended by the Crystal City Sector Plan,” a county staffer told the Board. “Hopefully this will encourage other property owners to undergo the same type of redevelopment rather than looking to renovate their buildings.” 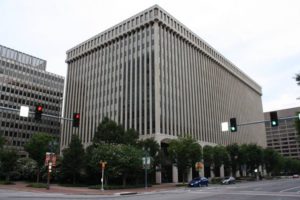 The new building will replace an empty, Brutalist-style office building at 1851 S. Bell Street — a building regarded as so unattractive from street-level that audible laughter could be heard when Jay Fisette sarcastically referred to it as “beautiful.” Improvements to the streetscape were considered a significant community benefit of the project.

“We are beginning to see the community’s vision for a more vibrant, walkable and transit-oriented Crystal City take shape,” Arlington County Board Chair Mary Hynes said following the 4-1 vote. “1900 Crystal Drive will be a catalyst for the sort of redevelopment that will reinvigorate the area with quality office space and more retail, and help ensure this area remains one of the region’s premier neighborhoods for decades to come.”

Mitchell Schear, President of Vornado/Charles E. Smith, the largest property owner in Crystal City, said the continued redevelopment of Crystal City will be a “team” effort. He encouraged the county to speed up its plan to build a Crystal City streetcar line that will run from Pentagon City to Crystal Drive to the Alexandria border.

In all, the approval process for 1900 Crystal Drive took about four hours on Saturday.