The center recorded $1.22 million in revenue and $3.55 million in expenses for FY 2012. Net taxpayer support was $2,327,016, $3,842 less than originally budgeted. The result is a marked improvement over previous budgets, which contained unrealistic attendance and revenue expectations; Artisphere’s revenue came in nearly 75 percent below budget for its first fiscal year.

While FY 2012 expenses were under budget — thanks in part to “a reduced amount of programming following the departure of Artisphere’s previous programming director,” according to a just-released year end report — revenue figures present more of a mixed bag.

Admissions and ticket income, educational program income, catering income, and concession income were all well under budget. Were it not for unexpected “event sponsorship” income, largely from the Rosslyn Business Improvement District — a major Artisphere patron which had already contributed $475,000 in the form of a donation — Artisphere would have required more tax support than budgeted.

The year end report attributed the lower admission and ticket income — 18 percent below expectations — to the sudden departure of Artisphere programming director Rosanna Ruscetti in April. (A new programming director was hired in August.) Similarly, educational income was low because “Artisphere’s education director only became full time during the latter half of the year.” Catering and concession income was below expectations, the year end report said, because Artisphere has not yet hired a “resident caterer” to replace the shuttered in-house restaurant and offer full bar service during shows.

“[A] resident caterer has not yet been established and currently, only limited bar operations are being run by Artisphere staff,” the report said. Still, the reported noted that staff-run concessions did generate a profit.

Facility rental income, a key component to the plan for making Artisphere less dependent on taxpayer funds, was $362,767, mostly in line with expectations. Officials expect rental income to increase next year. 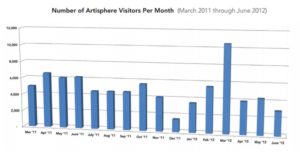 “As Artisphere continues to overcome a negative perception for rentals that was established in its first year of operation, income has increased,” the report said. “During the first quarter of FY13, rental income has been extremely strong.”

The report touted a number of successful events and exhibits at Artisphere. Most significant among those was an exhibit of 259 personal photos taken by the late Mexican artists Frida Kahlo. Artisphere was “the first and only venue in the United States” to present the exhibit, and it won critical acclaim and attracted 13,119 visitors.

Meanwhile, Digital Capital Week, a week-long festival of technology, entrepreneurship and social innovation, drew more than 2,000 visitors last fall. DCWEEK will return to Artisphere next month. (Artisphere is one of several venues around the region hosting DCWEEK events.)

In all, officials said Artisphere, which is now under the control of Arlington Economic Development, rose to the challenge of maintaining its budget.

“Artisphere’s new business plan challenged the organization to take a good hard look at its fiscal management and provided the Artisphere with realistic revenue and expense goals,” the year end report said. “The organization worked hard to maximize it income and minimize its expense. The end of the year numbers show that Artisphere was successful in managing its budget. Although Artisphere fell short of its revenue goal for the year, key staff hires, a focus on event rentals and improvements in ticket revenue should position Artisphere well for FY13.”