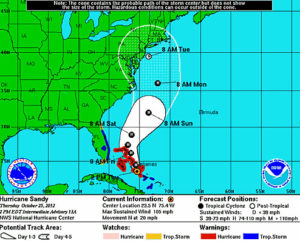 Sandy, which is currently churning in the Atlantic Ocean near the Bahamas, is expected to make its way north and threaten the D.C. area. Forecasters from the Capital Weather Gang say there’s a 75 percent chance of a direct or indirect hit from Sandy, which could bring 2 to 8 inches of rain and wind gusts from 50 to over 75 miles per hour.

Regan said she was planning to participate in a conference call with forecasters, organized by the Metropolitan Washington Council of Governments, which was to take place at 3:30 Thursday afternoon. She said the county was waiting for a more definitive forecast of Sandy’s path before taking additional steps. The storm isn’t expected to hit until Sunday or Monday.

“We’re waiting for more information,” Regan said. “There are lots of different models out there right now. They’re not able to exactly tell us which way it’s going to come.”

Still, Regan said the county will act swiftly to staff its Emergency Operations Center for the storm if it becomes clear that D.C. is in Sandy’s likely path.

“Because there’s a weekend involved, I don’t want to scramble at the last minute to try to find people,” she said. “I always say, plan for the worst and hope for the best.”

Three Office of Emergency Management staffers are already scheduled to be on duty on Sunday, Regan said. They’ll be staffing the unified command center for the Marine Corps Marathon, which is scheduled to start in Arlington around 8:00 that morning.

VDOT says it is also closely monitoring Sandy while “making all appropriate preparations and taking all precautions.”