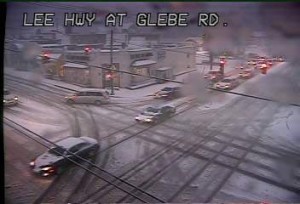 Arlington Public Schools students will be dismissed on-time from school today, despite a predicted evening snowfall.

A Winter Weather Advisory has been issued for Arlington and the D.C. region, warning of the potential for about an inch of snow between 2:00 and 9:00 p.m. Though relatively light, the snow could wreak havoc with traffic during the evening rush hour.

(On January 26, 2011, a much heavier snowfall during the evening rush hour resulted in motorists abandoning their cars on the GW Parkway.)

While Montgomery, Fairfax, Prince George’s and Loudoun County schools have announced early dismissals, Arlington Public Schools announced at 11:20 a.m. that students would not enjoy the same abbreviated school day. All APS after-school and evening activities, however, have been canceled.

“Arlington Public Schools will dismiss on time,” the school system said. “All APS after-school and evening activities are canceled, including extracurricular activities, interscholastic contests, team practices, field trips, adult and community education classes, and recreation programs in schools and on school grounds. Extended Day will remain open until 6 p.m. but those parents are encouraged to pick up their children earlier if possible.”

THE NATIONAL WEATHER SERVICE IN BALTIMORE MD/WASHINGTON HAS ISSUED A WINTER WEATHER ADVISORY FOR SNOW… WHICH IS IN EFFECT FROM 2 PM THIS AFTERNOON TO 9 PM EST THIS EVENING.

* ACCUMULATIONS… AROUND AN INCH.

* IMPACTS… ROADS WILL BECOME SNOW COVERED AND SLIPPERY… RESULTING IN HAZARDOUS TRAVEL DURING THE AFTERNOON AND EVENING COMMUTE.

PRECAUTIONARY/PREPAREDNESS ACTIONS… A WINTER WEATHER ADVISORY FOR SNOW MEANS THAT PERIODS OF SNOW WILL CAUSE PRIMARILY TRAVEL DIFFICULTIES. BE PREPARED FOR SNOW COVERED ROADS AND LIMITED VISIBILITIES… AND USE CAUTION WHILE DRIVING.