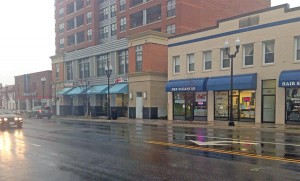 The lingering questions that surround the planned Columbia Pike streetcar project have given developers pause as they look to build along the corridor, according to one of the Pike’s biggest boosters.

Takis Karantonis, executive director of the Columbia Pike Revitalization Organization, says he’s seen a slowdown in development and business interest in recent months, as local politicians and residents have continued to debate the merits of the streetcar project. With Arlington County Board member Chris Zimmerman, a key streetcar supporter, retiring early next year, that debate is likely to continue unabated as candidates vie to fill his seat in a special election.

Despite some uncertainty about how and when the Pike streetcar will be funded, Arlington County is still moving forward with the project. Karantonis is pushing for the streetcar to be built sooner rather than later.

“There isn’t uncertainty around the streetcar, but there are lot of people who want to create uncertainty,” Karantonis told ARLnow.com Monday. “This is concerning the business community because people want to be able to at least make medium-term decisions, and they don’t welcome this kind of prolonged debate about the streetcar itself.”

Karantonis said the ongoing questions about when the streetcar will actually be built has slowed both commercial and residential development. Modern development strives for a mix of uses, Karantonis said, so when one form development is slowed, all forms are. 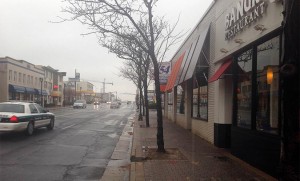 “The uncertainty affects investment proposals,” he said. “It’s the first thing developers will ask, ‘what is the progress? Show me the alignment.’ That’s what they ask.”

“It’s not easier for [small businesses] to wait,” he said. “They look at the streetcar as a catalyst and a game-changer. The more challenging the economic times are for us with the government sputtering along, this hardens the demand on local government to deliver the investment goods it has planned for.”

County Board Member Libby Garvey — who was elected last year on an anti-streetcar platform and is currently the lone voice of streetcar dissent on the Board — isn’t so sure about Karantonis’ hypothesis.

“It would surprise me if there were many businesses very concerned about delays in the streetcar,” Garvey wrote in an email. “Remember, we are talking about adding 10 streetcars to 34 buses along the Pike. Hardly a major change in transit, just a major change in expense and disruption of traffic as 10 fixed rail vehicles run in mixed traffic creating headaches for everyone.”

Streetcar opponents and supporters alike are looking carefully at the implementation of the streetcar along the H Street NE corridor in Washington, D.C., projected to begin track testing next month and open next February. The streetcar was planned in 2003 when then-mayor Anthony Williams announced a project to revitalize the corridor.

District Department of Transportation Director of Communication Reggie Sanders said that H Street started booming soon after the streetcar was announced, even before the plan was finalized.

“The streetcar has certainly enhanced the H Street boom,” he said. “It definitely has enhanced the discussion of the excitement of H Street, no question about it.”

According to a 2011 Washington Post feature on H Street’s rebirth, however, construction of the streetcar tracks was far from easy for local businesses.

Salim Newman was born and raised on H Street. Since 2006, he’s been the owner of a shop at 13th and H that sells incense, clothing and health-care products.

When construction began on the streetcar line, Newman, 40, said he watched many of his friends’ businesses close their doors because of the construction and lack of parking: a beauty shop, a perfume store and a carryout place.

The sales at his own shop declined 30 percent, he said. He eventually relocated across the street and reopened under a new name, Almahal.

“I guess the change is for the better,” Newman said. “But I’ve had buddies that tried to open a store, and the city told him they were no longer offering licenses for barbershops, fast food or carryout. How is that even fair? To say which businesses can open?”

Garvey argues that enhanced bus service along the Pike could “spur development… at a fraction of the cost” and disruption of a streetcar system.

“The claim that only adding streetcars will spur the kind of development we want to see on the Pike is a red herring and not backed up by independent research and facts,” she said.

END_OF_DOCUMENT_TOKEN_TO_BE_REPLACED

More Stories
Rental Report: Should That Be in My Lease?Morning Notes