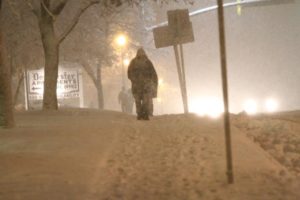 (Updated at 9:40 p.m.) All Arlington schools, courts and government offices will be closed Monday, the county announced Sunday night.

It’s at least the fifth time Arlington Public Schools have closed due to snow this school year.

All ART bus service has been suspended, in advance of a winter storm expected to drop 6-10 inches of snow Monday. Arlington’s western neighbor, the City of Falls Church, has declared a snow emergency now.

The Virginia Department of Transportation, meanwhile, is encouraging residents to leave their cars at home on Monday.

“By midnight tonight, 4,000 trucks will be staged along interstates, major roads and neighborhood streets in Fairfax, Loudoun, Prince William and Arlington counties,” VDOT said in a press release Sunday night. “Drivers should stay off the roads tomorrow… snow and frigid temperatures to northern Virginia.”

Staying off the roads should be easier for non-emergency federal workers — the Office of Personnel Management announced tonight that federal offices would be closed Monday.

Residents have been reporting a shortage of salt and other snow clearing supplies in local grocery and hardware stores.