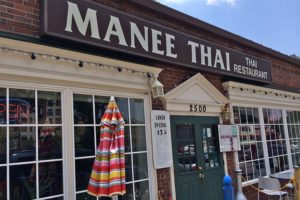 Manee Thai may be closing in the near future, and an Irish bar may take its place.

A restaurant called “The Celtic House,” from a company called “Green Brigade LLC,” has applied for a permit to serve wine, beer and mixed beverages at 2500 Columbia Pike, in the Arlington Village Shopping Center. That’s the current home of Manee Thai restaurant, which has been open for 13-14 years.

“Mo,” a man identifying himself as the owner of Manee Thai, told ARLnow.com today that he is in talks to sell the restaurant and retire. But he said nothing has been finalized.

“We have nothing going on yet,” he said. “We are still talking.”

No company phone number was listed for The Celtic House or Green Brigade LLC. The Virginia State Corporation Commission and Arlington County have no record of an LLC by the name of “Green Brigade.”

Another Irish-themed watering hole, P. Brennan’s Irish Pub (2910 Columbia Pike), has been open just down the street since 2010.