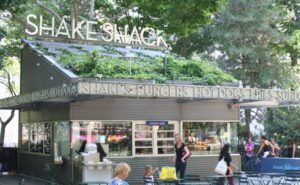 Shake Shack is looking at the burger desert of Pentagon City for a possible future expansion.

“I’d like to someday be further outside the city,” he said, though there are no concrete plans to open any locations there yet. Garutti could see such markets as Bethesda, Reston and Pentagon City responding well to a location.

Photo via Wikipedia/Beyond My Ken