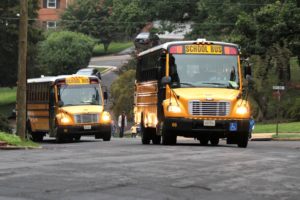 Some north Arlington elementary school parents are asking the County Board to spur the Arlington School Board to action on a new middle school.

The Jamestown Elementary PTA wrote to County Board Chair Jay Fisette on Monday, asking him to work with the School Board on a middle school construction plan as part of the County Board’s 2015-2024 Capital Improvement Plan.

The PTA is peeved that APS waffled in its recently-passed CIP, punting a decision on the location for a new middle school to December and only including planning funds instead of construction funds. It comes at a time when the county’s student population — especially on the elementary level — is burgeoning, thanks to more young families moving to or staying in Arlington to raise their kids.

If a new middle school is not built soon, current kindergarteners could enter middle school in 2020 at a time when Arlington middle schools are over capacity by more than 1,000 students, with most of the overcrowding focused in north Arlington, the PTA said.

“The proposed CIP can only be regarded as an APS plan knowingly to overcrowd Williamsburg and other middle schools in north Arlington and degrade the learning environment for thousands of the county’s middle school students,” Jamestown PTA president Thomas Jensen wrote.

The School Board has eyed both the Wilson School site in Rosslyn and the building that currently houses the H-B Woodlawn Secondary Program as possible locations for a new 1,300 seat middle school. Both proposals have met community criticism.

The Wilson School and H-B Woodlawn options are still on the table, according to a school spokesman, and the School Board says it will make a decision no later than Dec. 31. But the PTA wants more decisive action and planning.

“Lack of unanimity about use of the Wilson site is not an adequate reason to allow Williamsburg and other middle schools to become even more overcrowded,” Jensen wrote.

I am writing on behalf of the Jamestown Elementary School PTA board. We respectfully request that in your deliberations on the 2014 Capital Improvement Plan (CIP) for Arlington Public Schools (APS) you seek assurances from the school board and APS staff that they have in place and intend to implement a reliable plan to build and open an adequate number of new middle school seats in north Arlington in time to serve the increased number of middle school students projected by APS.

Unless you receive those concrete and credible assurances, the proposed CIP can only be regarded as an APS plan knowingly to overcrowd Williamsburg and other middle schools in north Arlington and degrade the learning environment for thousands of the county’s middle school students.

The APS Superintendent had proposed a plan to add at least 1300 seats by 2019. We supported that plan and expected the board to do so, too. Unfortunately, the board-approved CIP departed from the Superintendent’s recommendation and does not include construction funds for any specific projects to provide those seats. We are deeply concerned that the CIP, as approved, will not provide new middle school seats in north Arlington when they are needed.

We appreciate the value of additional public dialogue about use of the Wilson site. But we urge the County Board to insist that APS remain on schedule to supply the additional seats needed to serve the middle school students expected to be in the APS system in the next few years and thereafter. Lack of unanimity about use of the Wilson site is not an adequate reason to allow Williamsburg and other middle schools to become even more overcrowded.

From the perspective of Jamestown families, the math is compelling — and completely unsatisfactory.

Please insist that the APS board and staff explain to you unequivocally how the proposed CIP will deliver the middle school seats that our students need, when they need them.

On behalf of the Jamestown PTA, thank you for consideration of our views.

END_OF_DOCUMENT_TOKEN_TO_BE_REPLACED

More Stories
New Four-Mile Race Comes to Courthouse This WeekendArlington Pet of the Week: The Badger