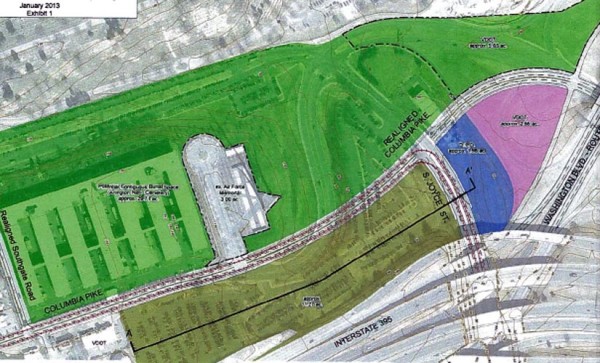 Arlington County has hired a lobbying firm to help facilitate a planned land swap between the county, the Commonwealth of Virginia and the Department of Defense.

As outlined in a memorandum of understanding last year, the county is planning to hand over the right-of-way for Southgate Road, near the Air Force Memorial, to the DoD, which plans to use the land — along with the former Navy Annex grounds and part of the state’s current Columbia Pike right-of-way — for an expansion of Arlington National Cemetery’s burial grounds.

As revealed in a recent public disclosure, the county has hired Alexandria-based lobbying firm Congressional Strategies LLC to help move the transaction along. The land swap has already passed the House of Representatives and is now included in the under-consideration U.S. Senate version of the National Defense Authorization Act, according to Brian Stout, the county’s federal liaison.

The county’s contract with Congressional Strategies calls for a $5,000 monthly retainer for all services and runs through October, with an option to be extended through June 2015, according to county spokeswoman Mary Curtius.

“The purpose of the lobbying contract is to facilitate and bring to closure the Navy Annex Land Exchange project,” Curtius said. “This involves advocacy in both the legislative and executive branches to supplement the efforts of County staff.”

The land swap will benefit the county in several ways. 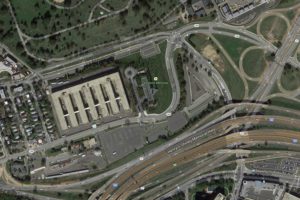 Arlington will receive a sizable parcel of land south of Columbia Pike, on which the county hopes to build an Arlington County and Freedman’s Village history museum, additional parking and facilities for the Air Force Memorial, and other amenities that do not detract from “the dignity, honor, and solemnity of Arlington National Cemetery.”

Also, the exchange will facilitate a realignment of Columbia Pike and its intersection with S. Joyce Street. The realigned Pike will take a more direct path to S. Joyce Street, through the former Navy Annex parking lot, and will provide a better alignment for the future Columbia Pike streetcar.

In addition to an expansion of Arlington National Cemetery, the DoD plans to use some of the land in the swap, near the Pike/Joyce intersection for a future visitor center for the Pentagon Memorial. The Senate is expected to vote on the NDAA later this year.