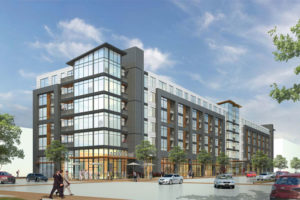 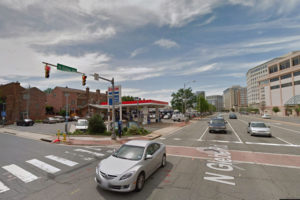 The Ballston development boom doesn’t appear to be slowing down anytime soon: a developer has submitted plans to Arlington County for a six-story, 175-unit apartment building on N. Glebe Road.

The Penrose Group has purchased parcels of land on which the Prestige Certified Motors and Macy’s surface parking lot sit, between N. Carlin Springs Road and 7th Street. It also has a contract to purchase the Exxon station at 660 N. Glebe Road, according to Penrose Group Founder and President Mark Gregg. The Washington Business Journal first reported the development.

The building, called 672 Flats, will have 4,400 square feet of retail on the ground floor facing Glebe Road, next to a 725-square-foot bicycle storage area, a lobby, “club room” and fitness center. Andrew Gregg, Mark’s son, told ARLnow.com the number of parking spaces is yet to be determined — the county hopes for 175 while Penrose is angling for fewer — but there will be an underground garage.

Mark Gregg said he expects the site plan process to conclude with County Board approval by spring 2015, and for construction to begin later that fall. Gregg expects the building to be complete in 2017. Along with the building, Andrew Gregg said Penrose plans to put on-street parking along N. Glebe Road for “off-peak hours only,” and build a right turn lane on 7th Street.

“We want to make that intersection safer,” Gregg said. He added there would be no parking in a proposed alley between the building and the townhouses along N. Carlin Springs Road and Tazewell Street, but there could be street parking along 7th Street. According to the WBJ, “The Bluemont Civic Association in February offered its conditional support for the project,” with the conditions including traffic and pedestrian safety improvements.

The Penrose Group is also building the Latitude Apartments in Virginia Square and Pike 3400, coming at the intersection of Columbia Pike and S. Glebe Road. Latitude should deliver in 2016, Andrew Gregg said, and Pike 3400 could begin leasing by the end of this year.

With the Rosenthal Mazda dealership on the other side of 7th Street N. from 672 Flats also in line for redevelopment, Gregg said the plot of land is one of the last remaining redevelopment opportunities in Ballston.

“I think that it’s conveniently located for the Ballston area. It’s a block and a half from Metro, and it’s across from the mall” which will be redeveloped, Mark Gregg told ARLnow.com today. “We think the whole Ballston area along Wilson and Fairfax and Glebe will be an area people want to live in.”