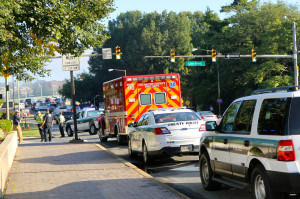 A woman was hit by a car and injured just south of Key Bridge Friday morning as an Arlington County Police Department officer directed traffic.

The pedestrian was crossing Lee Highway at a corner locals have called the “Intersection of Doom” about 8:20 a.m. when the driver of a black SUV plowed into her, officers and a witness said. The driver was headed north on N. Lynn Street and was making a left turn onto Lee Highway when she hit a northbound pedestrian who was using the crosswalk and had the walk signal, according to officers and witness David Clark.

Clark, a 56-year-old Rosslyn resident, was doing his daily exercise routine in Arlington Gateway Park near the intersection when he heard a yell.

“I was coming up from my pushup when I saw a lady crossing the street, and then I heard her holler,” he said. “The lady was in the crosswalk when she got hit.”

An ACPD officer was directing traffic when the crash occurred but momentarily had his back turned to that corner, officers said. An officer is posted weekday mornings from 8:00 to 9:30 a.m. at the intersection packed with drivers, pedestrians and cyclists, an officer said.

The pedestrian was taken to a hospital and thought to have a broken ankle, according to police scanner traffic. Officers on the scene said the driver could be ticketed, pending an investigation.

In May, the Arlington County Board approved spending an additional $75,000 on safety improvements to the intersection where cyclists have been hit by drivers several times. The upgrades will extend curbs at the intersection’s corners, modify traffic signals, add on-street bike lanes and remove a travel lane from Lee Highway. Construction was set to start in the spring and be complete in summer 2016.