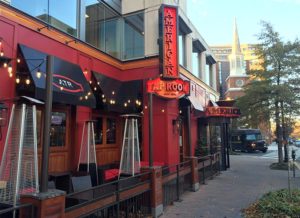 ATR’s permit renewal request was pulled from the Board’s “consent agenda” for non-controversial items by County Board member Mary Hynes. It was instead heard individually on Tuesday, giving Hynes, a nearby resident, a chance to inquire about a couple of noise complaints she had received from her Lyon Village neighbors.

The Board was assured by an ATR manager that the bar has addressed the noise issue and that it in fact doesn’t host any live entertainment anymore — instead it’s seeking to hang on to the permit “just in case.” That was enough assurance for Board, which took little additional time to approve the routine renewal request.

While it won the battle, it’s unclear if ATR in Clarendon will win the war. Restaurant and commercial real estate industry sources have told ARLnow.com that American Tap Room has been seeking a buyer to take over its lease.

We’re told that the company pays more than $650,000 per year in rent for the Clarendon location, which has not enjoyed the same level of success as its locations in Bethesda and Reston. The latter two locations are “crushing it” and the company may simply be looking to focus on more profitable ventures, a source says.

However, everything seemed business as usual with the ATR manager who spoke at the County Board meeting. He gave no hints of any possible changes to come.

Responding to an inquiry sent to a media representative, an ATR manager contacted ARLnow.com last week. The manager said the Clarendon location is not closing, but declined to speak on the record and sought assurances that an ARLnow.com editor was not recording the call.