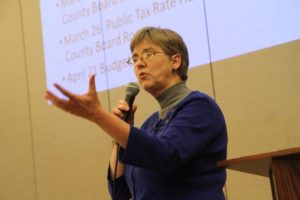 Democrats need to do a better job of making their voices heard at community meetings.

That’s the message from County Board Chair Mary Hynes, who announced her retirement on Wednesday.

Acknowledging that the current County Board majority has been going through “a rough patch,” Hynes urged fellow like-minded Democrats at Wednesday night’s Arlington County Democratic Committee meeting to stand up and speak out at County Board meetings and elsewhere.

“It is very important — I can’t give this message strongly enough to the people in the room — you need to stand with us,” Hynes said. “You cannot believe that just because we’re up there and it feels okay to you that it is okay. We need your voices and we need your faces and we need you to pat us on the back every once in a while and come to the public hearing.”

Unsaid in Hynes’ message: those who oppose things — the Board majority, streetcars, aquatics centers, schools, fire stations, affordable housing developments — are doing a better job of getting their message out and being visible at community functions than the rank-and-file Democrats who support such things.

“Put a little time in,” Hynes urged. “Because it makes the work possible. We do this on behalf of you.”

As for her planned retirement — like Walter Tejada, she will not run for reelection and will serve out her term through the end of the year — Hynes said it was a personal decision.

“It is time for a new chapter for me,” Hynes said. “I’ll be able to make music more and read for pleasure, instead of reading to help me weigh the tough choices before us as a community.”

“I’ve been at this long enough to know that no one person is irreplaceable,” she continued. “My goal was always to leave Arlington better place than I found it, and I hope that I have done this.”

“When Arlingtonians roll up their sleeves and say ‘we can make a difference,’ we do make a difference… We can build a vibrant future, we can move past this rough patch, if we collaborate, use your common sense and build a consensus. That is the task that is before us. I know we can do it.”

Hynes received a standing ovation from the party faithful before and after her remarks.

“Our party, and our values and our people are responsible for creating the Arlington we all love today,” she concluded. “And don’t you ever let anyone tell you something different.”

END_OF_DOCUMENT_TOKEN_TO_BE_REPLACED

More Stories
Open Houses in Arlington This WeekendWWBG: Fussing Over Some Excellent Lagers