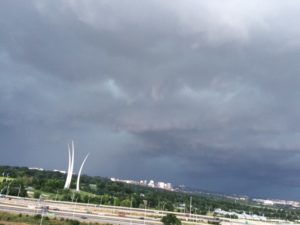 Update at 8:15 p.m. — The strong storm that blew through Arlington this evening has left behind fallen trees, widespread power outages and long flight delays at Reagan National Airport.

Dominion Virginia Power is reporting 4,245 customers without power in Arlington — almost 5 percent of all customers in the county. Power outages have been reported in Pentagon City, in Courthouse near I-66 and in the Virginia Square area.

The Fashion Centre at Pentagon City mall was evacuated during the storm due to a power outage there. Scanner reports suggest firefighters rescued some customers from stuck elevators. The Pentagon Centre mall was also reported to be without power.

Update at 6:50 p.m. — The Severe Thunderstorm Watch has been upgraded to a warning.

SEVERE THUNDERSTORMS PRODUCE DAMAGING WINDS… LARGE HAIL… DEADLY LIGHTNING AND VERY HEAVY RAIN. FOR YOUR PROTECTION… MOVE TO AN INTERIOR ROOM ON THE LOWEST FLOOR OF YOUR HOME OR BUSINESS. HEAVY RAINS FLOOD ROADS QUICKLY SO DO NOT DRIVE INTO AREAS WHERE WATER COVERS THE ROAD.

Earlier: Arlington and the surrounding D.C. area is now under a Severe Thunderstorm Watch.

Forecasters say strong storms are likely this afternoon and evening, as cold front approaches from the west and brings with it a line of storms.

From the National Weather Service.

END_OF_DOCUMENT_TOKEN_TO_BE_REPLACED

More Stories
Ask Will: How Can I Improve the Chances of My Bid Being Accepted?Apartment Building Catches Fire After Lightning Strike