Arlington County might have a tech-driven answer for commuters looking to save money and help the environment. 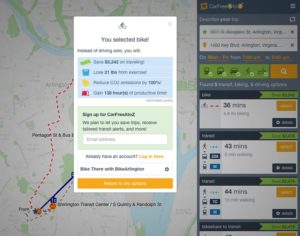 “Arlington is really thought of as the leader in public transportation in the country,” said Paul Mackie, the communications director at Mobility Lab, the research arm of ACCS.

CarFreeAtoZ plans trips in a manner similar to Google Maps or Mapquest, but it combines different transit options, such as walking, using the Metro and biking. The website is mobile friendly, so users can pull it up on their phones while on the go.

“It’s got more modes than any brand of app,” Mackie said.

Users plug in their current location’s address, the address of where they want to go and the time they’re planning to leave, and then the website calculates the different travel methods. At the moment, the users need to have the exact address as the website cannot find places such as the U.S. Capitol or a specific Metro station.

Commuters can sort the different travel methods by total time, total cost, calories and walking distance. They can also see the cumulative estimated benefits of making the trip via a non-car method on a yearly basis.

For instance, CarFreeAtoZ recommends biking from Fairlington to Rosslyn, estimating that it would save $3,242 plus result in 21 lbs of potential weight loss and a gain of 138 hours of “productive time.” The bike trip takes 36 minutes during the morning rush hour, compared to 18 minutes via car or 43 minutes via transit.

“It actually ranks what would be best for you,” Mackie said. 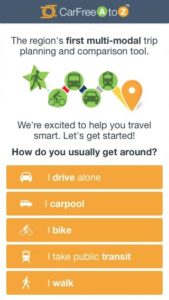 The website is helpful for individual commuters but also for businesses, Mackie said. Businesses can encourage their employees to use the site to plan their commutes, which also helps promote a healthier lifestyle.

While CarFreeAtoZ is targeted at people who live in the metropolitan area, it does recognize addresses in the far suburbs. For those that live far from a Metro station or Metro bus stop, the website helps connect people to carpool.

The website is currently available to all transportation authorities in the Washington, D.C. area with plans to make it available to authorities throughout Virginia in the next year. It’s powered by open source transport data, planning and visualization technology, which kept costs down, sped up development and will make it easy for other local agencies to use and customize.

“It’s replicable for other agencies and cities across the country,” said Mackie.

While he knows the site will not convince everyone to change their commute, Mackie said the site can help remind drivers that there are transportation alternatives that don’t require getting rid of their car. The system merely adds more transportation options if they would chose to take a healthier or more cost effective commute, he said.

CarFreeAtoZ was created out of a partnership with Virginia’s Department of Rail and Public Transportation. The county allocated $100,000 for development of the website in fiscal year 2013, while the state paid $400,000 via a “demonstration grant.”

The county has currently moved to “phase two” for CarFreeAtoZ, Mackie said. It’s expected to cost $1 million, which is also coming through a grant from the Department of Rail and Transportation.

Phase two, which is currently underway and will continue over the next year, involves both software tweaks and public outreach to make CarFreeAtoZ an effective tool for businesses to use.

“You might ask why the government is investing in this tool instead of letting the private sector innovate? Simple. There is no private-sector incentive to make the grid work better,” Mackie said in an email. “Infrastructure management falls upon government. For the last 20 years, the county has invested in helping people use transit, walk and bike.”