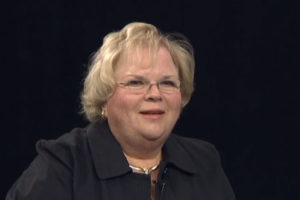 “I think people’s trust of government at all levels has changed,” Donnellan said, in a video interview produced by the county.

Donnellan, who served more than 30 years in the Arlington County government, including five as county manager, said she watched the county move from being more short-term focused in approaching renovations and other projects to taking on larger projects and making longer-term capital improvement plans, a shift she credits to County Board Chair Mary Hynes, who’s retiring after this year.

The Kettler Capitals Iceplex above the Ballston mall garage, which Donnellan advocated for, was one of the first large projects in a long time, she said. Since then, the county has pushed large projects like the Artisphere, the Columbia Pike streetcar and the Long Bridge Park aquatics center — but struggled in its execution and in selling the big projects to an increasingly skeptical community.

“I think the ability to spend money on high profile projects became an issue,” Donnellan said.

The streetcar debate was the first time the county had seen a large community effort against a county project, she said, adding that she had to hire a communications team to fight against misinformation being spread by streetcar opponents.

“So by giving that project up, we lost a lot of money that was going to support that project, but I believe the politicians at the time felt that it would calm the community down and build trust back by saying we’re smart enough to change course when needed,” Donnellan said.

Artisphere, which closed down over the summer, was another area where the community and government didn’t see eye to eye, she said.

“In all fairness, the Artisphere had done some great things. It really did have acclaim it was getting in the region,” Donnellan said. “But it had lost the trust and support of our elected officials and some in the community to the point where as the manager I had to make a lot of decisions.”

Donnellan said she had floated Artisphere for a couple of years but eventually had to pull the plug, a decision that upset some in the community.

The aquatics center in Long Bridge Park is one of the projects that the community might need to rethink, she said. Currently, the county is looking a partnership with the City of Alexandria in order to secure the funding needed to build the “state-of-the-art” facility.

“And just to clear that up, the only reason the aquatics center was not built is because the bids came in way too high,” Donnellan said.

She attributes the high bids to the inclusion of a specialized heating and air conditioning system not generally used at pools. The system is more efficient, she said, but added that ambiguity in its specifications may have made contractors increase their bids.

Looking toward Arlington’s future, the area that causes the biggest disconnect between the public and government is the overcrowding issue at schools, she said.

“We have one of the biggest things happening to us in this community than we’ve had in decades and that’s growth in our school system,” Donnellan said.

The county is currently looking at how to place kids in seats, through new schools or relocatable classrooms, but parents will still have concerns about which schools their kids will attend and if they’ll be in a brick and mortar classroom versus a trailer, she said.

“If you talk about Arlington’s values, art and education have been as important as everything else we do,” Donnellan said.