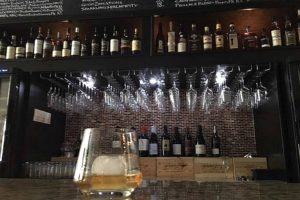 A new beverage trend is making its way into Arlington via Columbia Pike, and residents will soon have the opportunity to figure out what the hype is all about.

In such close quarters, a bar battle may be brewing — or perhaps, distilling — as the up-and-coming beverage in this case is whiskey.

Last week, Twisted Vines at 2803 Columbia Pike introduced 31 bottles of the brown liquor to its menu of wines and craft beer and is calling itself the first whiskey bar in the area.

(Copperwood Tavern, in Shirlington, may disagree.)

A short walk down the road from Twisted Vines is 2501 Columbia Pike, the home of the forthcoming Marble and Rye, a self-proclaimed wood fire kitchen and whiskey bar that’s planning a soft opening by the end of next week. Its current whiskey list includes 160 bottles and has plans to cap its selection at 200.

So, why whiskey, and why in Arlington?

“For us it’s actually a natural brand extension because we want to be a destination for fine wines, and now fine whiskey,” Tony Wagner, owner of Twisted Vines said. “People were asking for it. It’s a lot like with craft beer and wine in the sense that consumers are more knowledgable and interested in learning more about it.”

Wagner said when the restaurant first introduced its “extensive whiskey program” they started with the 31 bottles but hope to add 15 or 20 by the end of the year.

“We’re really proud of it,” he said of his whiskey plans. “Customers are becoming more sophisticated in their taste, so they want to go to a place where they can expand on that taste.”

Marble and Rye also hopes to teach locals the ways of whiskey, with a designated tasting room and cocktails that are “appealing to new whiskey drinkers and the whiskey fanatics.” 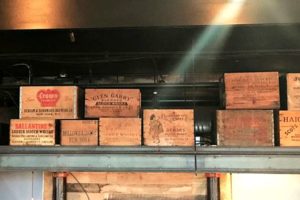 Restaurant spokeswoman Sarah Lakey described the restaurant’s menu as contemporary and locally-inspired while taking a sophisticated twist by pairing whiskeys with menu items. This is in the hopes that more customers will be encouraged to give the dark liquor a try.

“Whiskey is being enjoyed more and more as people realize there’s something for everyone,” she said.

The challenge of having a new whiskey bar as a next door neighbor, however, is welcomed.

“We are pleased that other restaurants on the Pike are expanding their whiskey offerings,” Lakey added. “Our hope is that the Columbia Pike corridor will become a destination for strong whiskey programs.”

The question of exactly how much room is on the Pike for whiskey bars, then, remains unclear. It seems that’ll be left for the drinkers to decide.