(Updated at 4 p.m.) Once one of Arlington’s top 5 intersections for collisions — particularly those involving pedestrians and cyclists — the “Intersection of Doom” in Rosslyn now isn’t even in the top 25. 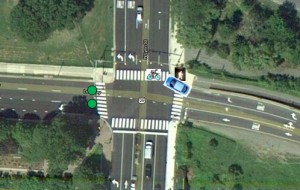 The county faced a challenge with the intersection: how to design quick and relatively inexpensive improvements at an intersection where 1,700 bicyclists per day try to cross a street also being crossed by 600 vehicles per hour exiting I-66.

“The obvious thing to do is separate these movements,” Marcus said.

Bicyclists and pedestrians now get a 10 second head start to start crossing Lynn Street while the traffic exiting I-66 waits at a red light with an illuminated no right turn signal. Pedestrians and cyclists then get a don’t cross signal while traffic turning right onto Lynn Street clears out.

Those relatively simple “operational improvements,” along with traffic enforcement and a public education campaign by Arlington County police, have dropped the intersection out of the county’s top 25 most crash-prone, Marcus says.

Despite the improvement, Marcus said the county is getting ready to begin a planning process for a more permanent solution to pedestrian-car conflicts at the intersection.

“There’s certainly an opportunity to build something,” he said.