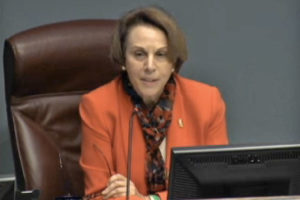 Garvey, a Democrat who has clashed with the local Democratic establishment over her endorsement of independent John Vihstadt and opposition to the Columbia Pike streetcar, was unanimously elected County Board Chair at the Board’s annual New Year’s Day organizational meeting on Jan. 1.

Jay Fisette, meanwhile, was elected vice chair. Fisette, who has served on the Board since 1999, is now the body’s most senior member, following the retirements of Mary Hynes and Walter Tejada. Their successors, Katie Cristol and Christian Dorsey, served their first day on the Board at Friday’s meeting.

Garvey, who was first elected in 2012, outlined her priorities at the meeting. Among them:

Garvey said she also wants to “ensure that every Arlingtonian, people of all ages, interests, and from across the socioeconomic spectrum, can live and work here comfortably.”

Acting County Manager Mark Schwartz said he and county staff are focusing on improving the county’s use of technology in service delivery and to promote government transparency and accountability. Possible new initiatives include streaming county commission meetings, which currently are not recorded for public broadcast.

Vice Chair Fisette, meanwhile, said his focus will be on schools and county facilities

In her remarks, Garvey said she looks forward to “the need for facilities, including schools, while constrained by limited land,” along with strengthening Arlington’s economic competitiveness, balancing the budget and focusing on housing affordability.

“Clearly, some things are going to be different this year, but a lot will stay the same,” Garvey said. “My goal is to see that Arlington achieves its potential.”

“We have challenges, like our commercial vacancy rate, our growing need for more school space, and our shrinking supply of affordable housing but this remains a wonderful community,” Garvey continued. “I’m confident that, together, our residents, our businesses, our staff, and this new Board will make sure that Arlington delivers outstanding customer service to all our residents and businesses, that every Arlingtonian who wants can have a voice in our government, and that we will work strategically to make this wonderful County even better.”