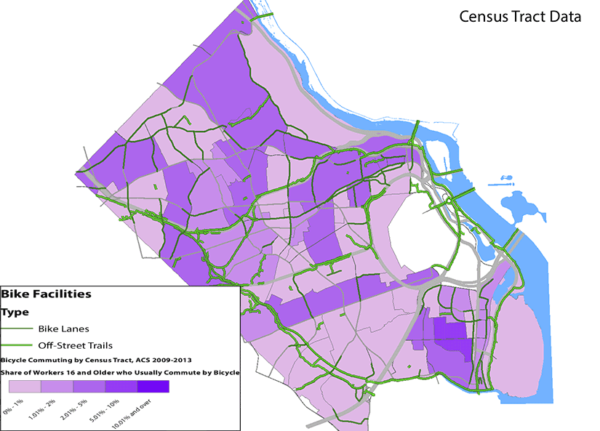 Using census data Arlington County was able to determine which parts of the county have a higher percentage of bike commuters.

So where do bike commuters live?

“In some neighborhoods, especially those near the county’s trail system, at least one in 10 people bike to work,” writes Stephen Crim, research director for Arlington’s Mobility Lab. “Certain tracts along the Custis Trail in North Arlington and near the Mt. Vernon Trail in South Arlington had biking rates much greater than the county’s average over that time period, 1.3 percent.”

The census data used to create the map is from 2009-2013. With Metro’s recent woes and Arlington’s continued efforts to promote bicycle use and make it safer and more convenient, it’s possible that the 1.3 percent bike commuting average has increased by now.

Bike to Work Day 2016, meanwhile, is scheduled for two months from now, on Friday, May 20.