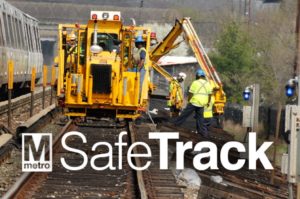 The first stage of SafeTrack involves single tracking on the Orange and Silver lines between Ballston and East Falls Church. Trains will run every 18 minutes, with additional Orange Line trains running from Ballston to New Carrolton.

In response, Arlington County will supplement WMATA’s efforts to assist travelers with its own. ART routes 55 (Rosslyn-East Falls Church) and 52 (Virginia Hospital-Ballston-East Falls Church) will use 40-foot buses instead of the usual 35-foot buses to add capacity during the surge. The county is also considering adding a bus lane on Lee Highway to speed up 55 buses during rush hour.

Capital Bikeshare will also be expanded, with capacity increases at the Ballston and Rosslyn stations along with a new Bikeshare station being installed at the East Falls Church station. For new or inexperienced riders, “bike trains” — bicyclists riding as a group — will be run between Rosslyn and East Falls Church, stopping at each Metro station along the route.

Along with the transportation additions, the county will make changes on the streets around the main Metro hubs, removing some street parking and converting streets to bus-only during rush hours.

Metro has released the following YouTube video to explain the SafeTrack surge.