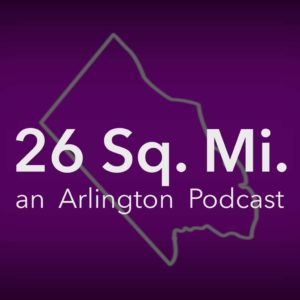 (Updated at 11:30 a.m.) On the campaign trail last year, said County Board member Katie Cristol, “there was no issue I talked about more than my own age.”

At 30, she might not have been elected as the youngest County Board member ever — that distinction belongs to Paul Ferguson — but Cristol saw her election as an opportunity to engage a typically under-represented group in Arlington: those under the age of 35, who make up half of Arlington’s population.

“It seemed important to me to have that point of view represented in the mix,” she said.

Cristol is the first guest on ARLnow.com’s new podcast, 26 Square Miles, which you can subscribe to on iTunes, Google Play, Stitcher and some other major audio services. (Let us know, in the comments, if there are any we should add.)

Cristol discussed a number of issues that have faced the Board this year and that are on the Board’s agenda for this fall.

We asked about the so-called Blue Ribbon Panel that was proposed, debated, then ultimately scrapped — what was that all about? Cristol pointed out that it was an initiative of the County Board chair, Libby Garvey, and that the Board has typically given some leeway to the chairman to accomplish their set priorities.

“There’s generally been deference to the idea that when someone’s done their rotation, served their time and they get to be chair, they can push forward something they’re really interested in,” she said. 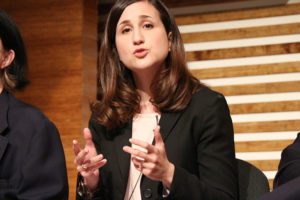 Cristol supported the panel because there was a need to get a handle on the “tremendous amount of planning documents in Arlington,” but added that “we got a lot of, very frankly, fair criticism about it.” If it were to be proposed again, she said, she wouldn’t necessarily support it.

On her and fellow County Board member Christian Dorsey’s support for striking workers at Arlington National Cemetery, she acknowledged that the Board “does not adjudicate labor disputes” but said that Board members do have a responsibility as leaders to support those who are struggling.

“I’m very proud to stand with workers who stand in the right in that particular dispute. We want people in our community to be treated with dignity,” she said.

On the topic of Fire Station No. 10 in Rosslyn, which is set to be torn down to make way for a development and a brand new fire station, Cristol said the decision on where to locate a temporary station has come down to two options, both of which are controversial: next to the future H-B Woodlawn or on Rhodeside Green Park.

“There are just no other options that meet the technical requirements and won’t affect response times,” Cristol said, calling it a “brutal decision.” The Board is expected to make a final decision this month.

On the loss of market rate affordable housing in Westover to new development, Cristol said even if the Board could legally stop the development, it would come with “unintended consequences.”

“I don’t think the most effective way is ever for the government to intervene in the market in such a dramatic way,” she said.

You can subscribe to the podcast via iTunes, Google Play or Stitcher, or you can listen via the player below.