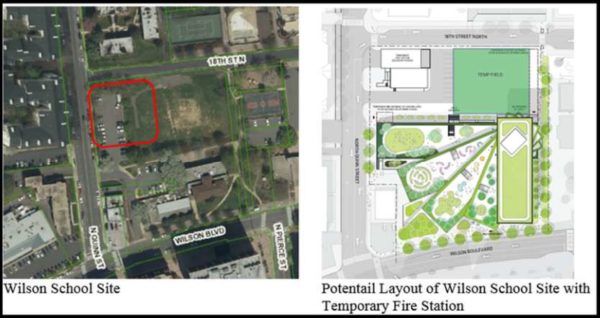 This summer’s back-and-forth drama over the location for a temporary fire station in Rosslyn will culminate in a County Board vote this weekend.

Arlington County Manager Mark Schwartz is recommending that the Board stick with the original plan: to build and operate a temporary fire station on the Wilson School site while Fire Station 10 is torn down and a new permanent fire station is built in its place as part of a private redevelopment.

That plan drew criticism from parents of H-B Woodlawn students, who worried that the temporary station would be built on what would otherwise be a field for the school, which will be moving to a new building on the Wilson School site in 2019.

In addition to concerns about the temporary loss of what little open space there is adjacent to the school, concerns were also raised about students being picked up on busy Wilson Blvd while the temporary station is in operation.

One, Rhodeside Green Park, was unpopular with local residents, who started a petition against it that garnered more than 750 signatures. A second, along Lee Highway near the Rosslyn Holiday Inn, was determined by county staff to be too small and challenging from a construction standpoint.

An online poll posted on the county’s website resulted in 420 votes for the Wilson School site. The Rhodeside Green Park site received 299 votes and the Lee Highway property 113 votes.

More excerpts from the staff report, after the jump.

The Wilson School site is recommended for the following reasons:

Rhodeside Green Park was also considered as a possible site because of its location within the fire response area, County ownership, and adequate parcel size. However, the following factors were considered by staff to counsel against the siting of a temporary fire station at this location:

The Lee Highway property located next to the Rosslyn Holiday Inn was determined not to be a
feasible location for the temporary fire station for the following reasons: