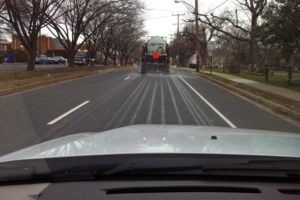 “Road crews are conducting anti-icing activities today and tomorrow,” VDOT said in a press release. “Please watch for crews as they stage along roads prior to the storm. Crews will treat roads with salt and sand as needed once the storm begins Thursday afternoon, plow in areas where and if snow totals reach two inches, and will remain on duty throughout the course of the storm.”

The snow is not expected to amount to much — maybe just a dusting to an inch. But even a small amount of snow could cause slippery conditions and virtual gridlock.

With snow expected tomorrow afternoon, crews have been pre-treating the roads today and will continue this evening and tomorrow. #ARLwx

Dusting to 1" of snow best for Thurs night around DC. Chances of 1" presented on this map: https://t.co/Jo0DGoyuDd pic.twitter.com/xgCAfeqNLW

It might not be necessary with this storm, but Arlington County is urging residents this year to park in a parking lot or on the odd numbered side of local streets when it snows.

The county recently released the following video on the topic.