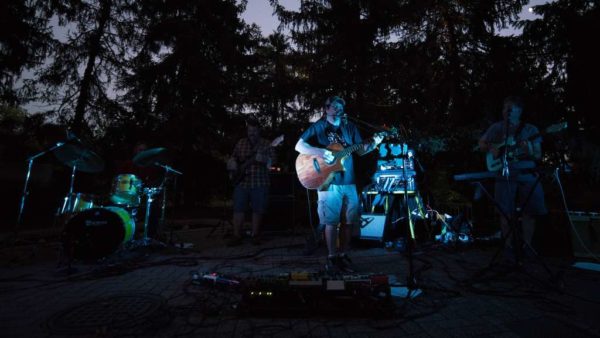 Delays on Blue, Orange Lines Due to Person Struck — A person was struck by a train at the L’Enfant Metro station around 9:30 this morning. The incident is causing delays on the Blue and Orange lines, as service has been suspended between L’Enfant and Federal Center. Silver Line trains are operating between Wiehle and Ballston. [Twitter, Twitter, Washington Post]

Reminder: E-CARE Event This Weekend — Arlington County is holding its biannual Environmental Collection and Recycling Event (E-CARE) on Saturday from 8:30 a.m. to 1 p.m. This time around the venue has changed; the recycling and hazardous household materials collection event is now being held at Yorktown High School (5200 Yorktown Blvd). [Arlington County]

Scott Disick Comes to Arlington, Disses ARLnow — Updated at 12:10 p.m. — Reality TV personality Scott Disick lorded over the grand opening ceremony for Sugar Factory in Pentagon City last night. About 100 people, mostly young women, showed up for the event, according to an ARLnow employee on the scene. Disick did interviews with local news outlets, but PR reps cut off the interviews and ushered Disick away just as our employee was next in line. [Twitter, Facebook, Daily Mail]

Kirwan’s Opens to Big Crowds — Mark Kirwan, owner of Samuel Beckett’s in Shirlington, may have another hit on his hands. His new bar, Kirwan’s on the Wharf in Southwest D.C., was packed last night before the Foo Fighters concert at the Anthem. [Facebook]

Marymount Makes USNWR Top Tier — “Marymount University is once again in the top tier among Regional Universities in the South in several categories, ranking 52nd overall in the 2018 edition of ‘Best Colleges’ by U.S. News & World Report.” [Marymount University]

AIRE Wins Regional Award — The Arlington Initiative to Rethink Energy was among this year’s recipients of the Climate and Energy Leadership Awards from the Metropolitan Washington Council of Governments. AIRE’s Energy Lending Library “makes it easy to check out a thermal camera, a box of 10 different LED bulbs, energy meter, and Do-It-Yourself energy retrofit books through the library system free of charge,” notes COG. [Metropolitan Washington Council of Governments]