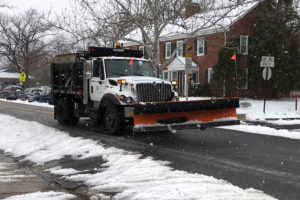 Arlington County and the wider D.C. region could receive its first dusting of snow this winter, as early as tonight.

The Capital Weather Gang reports that as Friday night wears on, the chances of light snow, or a mix of snow and rain, will increase. A mix of snow and rain is likely to fall during Saturday, with as much as an inch or two expected to accumulate depending on the severity of the storm.

County government has been planning all year for any winter weather, including budgeting $1.4 million for snow removal, stockpiling 9,200 tons of salt and spending 1,950 hours training snow crews. The team is made up of 92 drivers and 46 trucks.

Crews from the county’s Department of Environmental Services were out this morning with liquid de-icer to pre-treat some county streets.

Taking it to the streets again today. We are in Phase 1. #ArlingtonWXhttps://t.co/VcxxfIYKCX pic.twitter.com/9wk3u8KZt3

Work on snow-affected roads is broken into four phases, per a county press release:

As well as more than 1,000 lane miles of county streets, crews will also clear nearly 350 bus stops and shelters, 35 miles of sidewalks and 21 pedestrian bridges or overpasses. Ten miles of trails and three miles of protected bike lanes also will be cleared.

And residents can play their part in helping make snow clearing as easy as possible:

Crews from the Virginia Department of Transportation will also be pre-treating roads ahead of any snow. VDOT urged drivers to give their trucks room to work.

Our latest calculations for the chance of 2" or more of snow highlights the area from central Virginia up the I-95 corridor. For more graphics, visit: https://t.co/FdluCAnbTi. pic.twitter.com/gIDKzkFz8x

NEW: Snow is coming. Here's CWG's snow accumulation outlook for Saturday, as well as information on storm timing and our impacts analysis. Follow this link, which will be updated throughout today: https://t.co/84HdbBUrOy

ACPD is monitoring the weather conditions for tomorrow. If there is any change to the performance schedule, we'll post an update on our social media accounts.