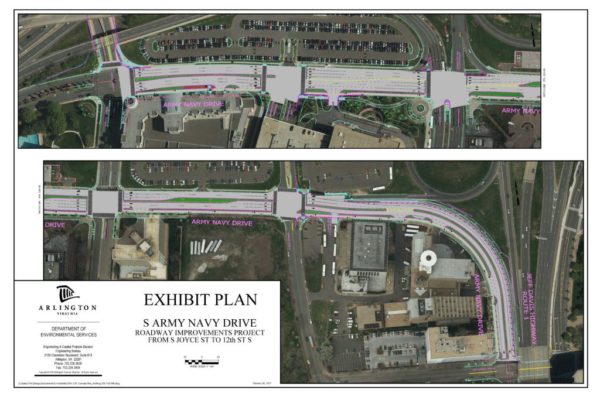 A section of Army Navy Drive could go down to one lane for cars in each direction under a Complete Streets plan being considered by the county.

The lane reduction would take place between S. Eads Street and 12th Street S., and staff said it would help connect various local neighborhoods and landmarks.

“The goal of the project is to improve the local connections between the Pentagon and the commercial, residential and retail services of Pentagon City and Crystal City,” staff wrote.

Other changes include planted medians instead of raised concrete medians, and new bike lanes.

“The reconstruction will provide a physically separated two-way protected bicycle lane facility along the south side of Army Navy Drive, in addition to shorter and safer pedestrian crossings, and will accommodate future high-capacity transit,” said the county’s website. “Motor vehicle travel lanes will be reduced in number where appropriate and will be narrowed to dimensions appropriate for a slower urban context.”

The project would also extend the Crystal City-Potomac Yard Transitway into Pentagon City by adding a dedicated bus lane on Army Navy Drive, and link to the bike lanes planned for S. Clark Street between 12th Street S. and 15th Street S.

Staff will host an Army Navy Drive Complete Streets Workshop on Wednesday, January 31 from 4-7 p.m. at the Aurora Hills Branch Library (735 18th Street S.). The meeting will be an open forum to discuss the project. 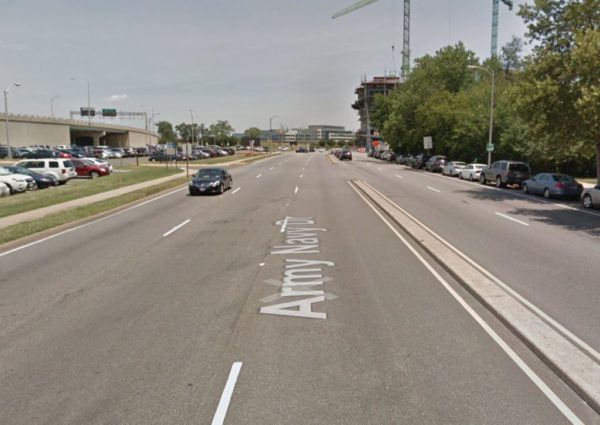 Image No. 1 via county staff. Image No. 2 via Google Maps.