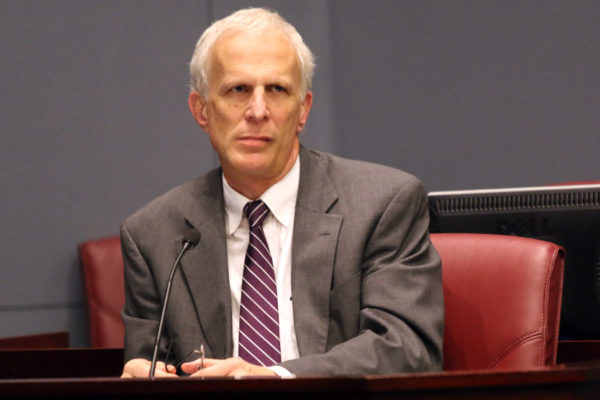 (Updated at 4:30 p.m.) Despite mounting financial challenges, top Arlington officials say they don’t plan to walk away from some major construction projects that are already in the works — even if that stance ruffles a few feathers in the community.

County Manager Mark Schwartz has stressed repeatedly that his newly unveiled proposal for the next decade of Arlington construction projects, known as the Capital Improvement Plan, will maintain the county’s standing commitments to several major facilities around Arlington, even as he’s forced to make painful cuts elsewhere.

With the county sending more money to the Metro system, all while dealing with declining commercial tax revenues and rising public school enrollments, Schwartz is adamant that projects like the Long Bridge Park Aquatics and Fitness Center and the new Lubber Run Community Center won’t be affected.

But the large price tag of those projects already has some community activists asking: why not change things up?

“We’re spending millions on synthetic fields and a new swimming palace… and 600 or 700 kids are moving into the county schools each year,” civic activist Suzanne Sundburg said at a town hall meeting Wednesday night (May 30) that was also broadcast via live Facebook video. “I understand people want to finish what they start, but at what point do we start re-evaluating priorities and reprioritizing?”

Schwartz said the question was a valid one, and will likely spark plenty of debate among County Board members as they evaluate his CIP proposal over the coming weeks. But he also warned that the risks of spurning these projects, particularly after the county has already awarded design and construction contracts, could far outweigh the benefits of saving some money.

“There are some things that are settled that we have to move on,” Schwartz said. “There are obligations on the books that crowd out our ability to do new things, and that is the situation we face.”

Schwartz was particularly concerned that people in the community might see abandoning the Long Bridge Park project as a viable option, even if they blanch at its $60 million price tag. Not only does he believe it would be a “breach of faith” with the community, following roughly two decades of discussions on the project, but he pointed out that a contractor has already spent the last five months working on it.

“If we back out on that, nobody in the contracting community is going to bid on any of our contracts for the next five years,” Schwartz said. “We’d probably not only be involved in protracted litigation with [the construction company], but we probably wouldn’t be able to do as much as we want to do, and our future projects would go up in price. People would build that in as a risk premium.”

Such an outcome would be particularly problematic as the county and APS eye a future full of new school construction; Schwartz noted that contractors tend not to see much of a difference between the county government and its school system.

Schwartz’s proposed CIP does come with some cuts likely to upset some people across the county, which could push the County Board to ignore the manager’s warnings. For instance, county transportation director Dennis Leach noted that initiatives like the Complete Streets program, Walk Arlington and Bike Arlington “did not get eliminated, but they were trimmed.”

The county’s Neighborhood Conservation Program, meanwhile, will also lose $24 million in funding over the 10-year plan, and Schwartz expects that there will “not be an adequate amount of money to keep pace with the program” in county coffers.

“This is a matter of making choices,” Schwartz said. “There isn’t extra money that’s laying around.”

The Board will hold a series of CIP work sessions over the month of June, with a planned final vote on the proposal on July 14.