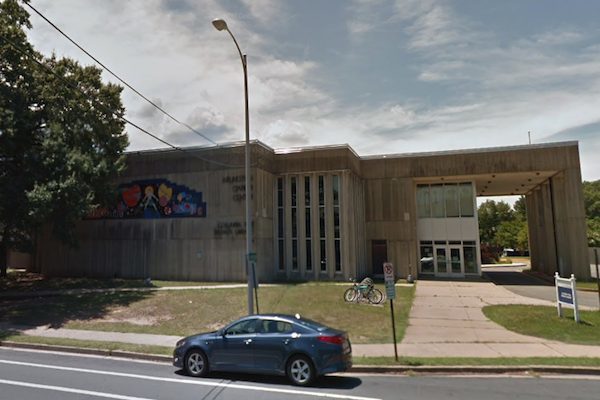 (Updated at 3:25 p.m.) There may be a way to satisfy parent demands for equitable amenities at a new high school program near Columbia Pike — but it comes at a cost.

The School Board is nearing a vote on a new Capital Improvement Plan, which will guide the next 10 years of school construction, and that means time is running out for officials to tinker with plans for the Arlington Career Center. The site will eventually be home to an additional 1,050 high school students, but the Board has yet to settle on just how it will move forward with building on the property.

Parents in the nearby Arlington Heights neighborhood, in particular, have expressed concerns about how many athletic fields and parking options will be available at the Career Center, particularly when compared to the county’s other high schools.

Under the version of the CIP the Board reviewed at its meeting last Thursday (June 7), the school system would build an underground parking lot at the site with a synthetic field on top — but that will only happen in 2026, two years after space for 800 students is set to open up at the Career Center.

For some parents, such a delay seemed worrisome, particularly as students search for open field space for sports. Accordingly, the Board reviewed a plan at a work session Tuesday (June 12) that would ensure the garage and field get built by 2023, pushing off the 800-seat expansion, and simultaneous construction of a performing arts wing, until 2025.

“The community really needs us to define what wrap-around supports we’re going to provide there to make it an equitable experience for high school students,” said Board member Nancy Van Doren.

The plan would also address some of the Board’s funding concerns. Initially, Arlington Public Schools was set to pay for all this construction using bonds, a process that would’ve piled up more debt than school budget minders are usually comfortable with. This revised proposal calls for APS to shell out $24 million from its capital reserve fund to help pay for the Career Center work, cutting down a bit on the school system’s debt load and shifting the reserve money from future elementary and middle school projects.

Board members did express some consternation about drawing down a reserve fund so substantially — Vice Chair Reid Goldstein suggested he had plenty of “heartburn” over the prospect that the Trump administration’s tariffs on steel and aluminum could jack up construction costs in the future, meaning those reserves could come in handy down the line. Yet most expressed a willingness to embrace the proposal, all the same.

“I see the tradeoffs,” Van Doren said. “But we need to fund as many seats as possible out of our own pocket right now.”

That’s because the County Board has its own money troubles to worry about, and likely won’t be able to help APS fund additional school construction.

Leslie Peterson, assistant superintendent of finance and management service, noted that the school system’s original CIP proposal calls for about $19 million more in spending than the county is currently expecting to send the school system. The revised school proposal, with its reliance on reserve money, would greatly close that gap, Peterson told the Board.

“It is not a given, as we sit here tonight, that what we vote on as our plan will be fully funded,” said Board Chair Barbara Kanninen. “We really do have to understand that.”

Yet even this newly retooled plan for the Career Center is unlikely to answer all the concerns of parents living nearby, some of whom have formed an advocacy group to fight for additional amenities at the site, particularly should it someday become a school serving only students living nearby. They’re even mulling legal action should the Board not meet their demands.

The Board is set to sign off on a final version of its CIP at its meeting next Thursday (June 21).