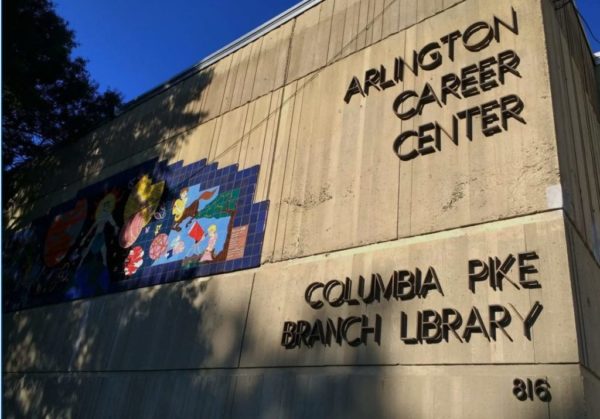 The Arlington Career Center could someday be home to more students than any of the county’s three comprehensive high schools, but a group studying the site is urging school leaders to keep the campus open to all students countywide for the foreseeable future.

Within the next decade, Arlington Public Schools plans to add 800 new high school seats at the site to meet the demands of an ever-growing student population — but there are still endless details to be worked out around how to accomplish that task, and what the center’s long-term future might hold. After nearly a year of deliberations, a working group convened by the School Board is attempting to provide some answers with a final report released last week.

Though the 35-member group can only offer recommendations to the Board, the report repeatedly reiterates the value of the center accepting students from across the county as an “option school,” at least until APS can build enough amenities on the site to match Arlington’s other three high schools.

“All Arlington students, regardless of the type of school they attend, deserve an educational experience that includes quality indoor and outdoor spaces, including access to (un-programmed) green space,” the group wrote.

The Board has yet to make any decision on the very thorny question of whether the Career Center will be open to students countywide or only draw in nearby students from set attendance boundaries. That’s prompted some fierce advocacy from local parents over the past few months, who argue that making the center a “neighborhood school” without a full complement of facilities and athletic fields would be unfair to South Arlington students.

As part of updating its 10-year construction plan in June, the Board did commit to constructing a multi-use gym, a “black box” theater, a performing arts wing, a synthetic athletic field and a parking garage at the site, all in time for 800 new students arrive in 2025. Yet the “lack of an on-site pool in the near-term” remained a “sticking point” for some members, the group said. The report recommends that APS build a pool on the site at some point, a feature backed by some county officials, but budget constraints make such an amenity unlikely, for now.

Most of all, however, the group expressed “frustration” about a lack of clarity on the option versus neighborhood question, noting that “the distinction in seats would have a direct impact on whether the Career Center site could become a de facto fourth neighborhood high school.”

Whatever the center’s ultimate status, the group repeatedly stressed that school leaders should see the site’s long-term future as a “high school campus.” While APS doesn’t yet know how many students it will need to educate at the center, the group expects anywhere from 2,200 to 2,800 could someday attend school there — for context, just over 2,200 students were enrolled at the county’s largest high school, Washington-Lee, as of this June. 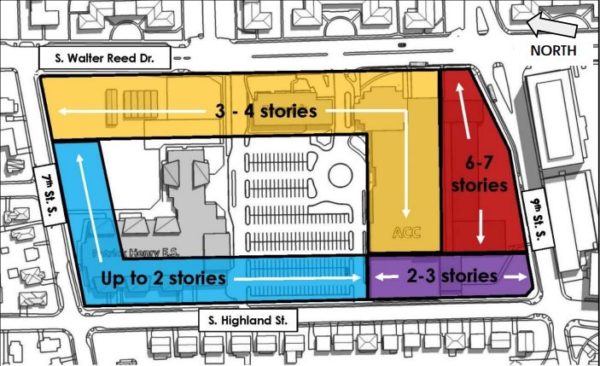 Accordingly, the group recommended that the school system design any changes to the center in a way that “supports potential growth and maintains maximum adaptability.”

APS isn’t sure whether it will someday demolish the current structure in its entirety or simply renovate it to accommodate the new students, but the group wrote that staff repeatedly assured them that “utilizing the core structure of the Career Center is the most environmentally friendly approach and one which can lower construction costs by up to 20 percent through limiting the amount of demolition required.”

However, the group does suggest that APS knock down some structures currently used for career and technical education classes, in order to free up space for a new, six-to-seven story “multi-level education space” near 9th Street S. and S. Walter Reed Drive. Those classes would then be moved to a new structure built along S. Highland Street.

The report also recommends adding a third floor “on top of the existing Career Center building for classrooms,” which could then connect to the new S. Highland Street structure.

Looking a bit further into the future, the group also urged APS to someday relocate the Columbia Pike Branch Library from its current home within the Career Center.

To do so, it suggests that the county acquire some properties owned by the Ethiopian Community Development Council just behind the center, running along S. Highland Street from its intersection with 9th Street S. to where it meets the pike. The group wrote that the nonprofit has already “signaled an interest in selling to the county,” and the land could help Arlington to build an expanded library on the site that “fronts Columbia Pike” to increase its visibility.

Ultimately, the group envisions that such a change would be transformative for the area, and it reasons that Arlington Economic Development officials could take the lead in pulling in developers, local universities and even art groups to chart a new future for the property. And it helps that all of those entities “could provide financial support necessary to acquire and develop” the properties, which surely won’t come cheap.