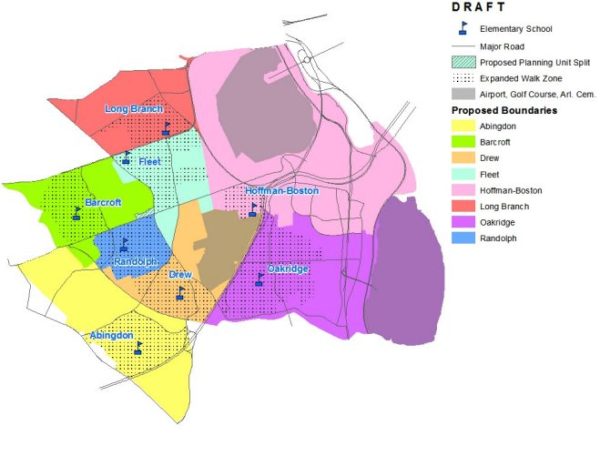 Arlington school officials are proposing a new boundary map that would keep South Fairlington students at Abingdon Elementary, answering the concerns of parents there who worried the school system’s process of drawing new attendance lines would break up the community.

The school system has wrestled for months now with the thorny question of how to best tinker with the boundaries for eight South Arlington elementary schools, in order to address overcrowding concerns and prepare for the opening of Alice West Fleet Elementary next fall. Previous proposals for new maps initially irked parents at the Drew Model School, prompting Arlington Public Schools officials to propose an option moving some students in Fairlington neighborhoods from Abingdon to Drew to help address those worries.

But that proposal has touched off a fierce backlash of its own, with some in the community arguing it would force the unnecessary of busing of Fairlington students and damage the community’s strong ties. Now, APS leaders are offering up yet another new option, leaving all of Fairlington at Abingdon and moving some Columbia Heights and Alcova Heights neighborhoods to Drew instead.

Such a change would leave Abingdon substantially overcapacity, with Drew and Fleet still with plenty of space. Yet, in a work session last Wednesday (Oct. 24), school officials indicated it could end up being a workable solution for the county’s boundary conundrums.

“We can’t maintain everyone’s status quo, because we’re in a growth environment, so something has to give,” School Board Chair Reid Goldstein said at the meeting. “In our economic environment, we also need to ensure we fill school buildings, but the results aren’t going to be perfect.”

School system figures show that Abingdon will likely sit at 124 percent of its designed capacity by next year, and the latest proposal would bring that down to just 120 percent, a reduction of about 20 students. By contrast, the boundary map involving the disputed Fairlington changes would’ve dropped Abingdon to 98 percent.

Still, some Board members expressed uncertainty about the value of such a trade off, wondering if it could create problems at Abingdon down the line — APS projections show Abingdon reaching 131 percent of its capacity by 2021, under the latest boundary proposal. Meanwhile, Drew will be at just 74 percent capacity under that plan, and Fleet will open at 90 percent of its capacity.

“In the long run, we don’t want to have to build a new school because we’re not using these facilities well,” said Board member Barbara Kanninen.

Yet APS planning director Lisa Stengle pointed out that Abingdon, Barcroft and Long Branch will all be included in both this year’s boundary process and the redrawing of boundaries set for 2020, giving school officials a chance to address overcrowding at Abingdon in the coming years. She added that process will include more school’s in the county’s northern half as well, allowing for more possibilities in shifting around students.

Stengle also noted that the newest proposal would bring down the percentage of students eligible for free and reduced price lunch in Drew’s attendance boundaries compared to previous maps. Parents at Drew expressed concerns that previous efforts would’ve unfairly concentrated low-income students at the school, as the FRL rate is a proxy for the economic diversity of each community.

The newest proposal would mean that 57 percent of students eligible to attend Drew would qualify for free and reduced price lunch, down slightly from the 60 percent figure that initially concerned parents. As of now, about 52 percent of the school’s attendees are FRL-eligible.

“We still haven’t found that sweet spot yet where all the considerations are exactly where we want them to be,” Stengle said.

Board members indeed sought to stress that they were well aware that any boundary proposal is bound to make at least some people unhappy, and Goldstein was careful to note that all of the maps offered up by APS officials over the course of the process “are all still possibilities at this time.”

But Kanninen, in particular, called for a cooling of tempers among parents worried about their children changing schools, urging anyone anxious about a move to a new school to simply call up their prospective principal and learn more about the curriculum before worrying too much.

“We are creating new communities when we do this,” Kanninen said. “Please keep an open mind and get excited about the possibilities.”

Superintendent Patrick Murphy will offer up a final boundary map recommendation next Monday (Nov. 5), ahead of a planned Board vote on the matter in December.