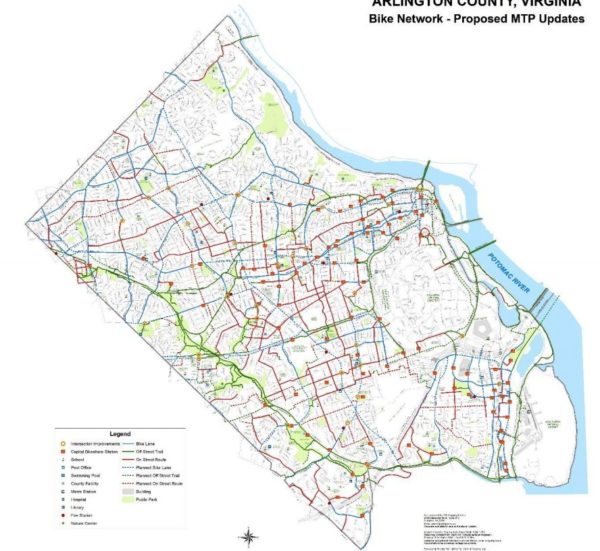 Arlington transportation planners are weighing major revisions to the guiding document for the future of the county’s bike infrastructure, sketching out a wish list of new trails and bike lanes they want to see over the coming years.

County officials have recently begun circulating a draft version of an updated “bicycle element” to Arlington’s “Master Transportation Plan.” The document was last updated a decade ago, and a working group has spent more than a year crafting potential changes for the plan.

In all, it contains 26 new pieces of cycling infrastructure from the last time the plan was revised, including a bevy of new trail segments, additional on-street lanes and trail renovations. The county is now soliciting public feedback on the draft in the form of a community survey, with additional engagement efforts to come.

But the document also includes some broad goals for county officials to pursue to meet the needs of cyclists over the coming decades, with a special focus on how Arlington can make people feel safer while riding their bikes on local streets.

“Many residents have identified that they do not have suitable bicycle facilities within their neighborhoods or ones that connect to the local destinations that they want to travel to,” the draft document reads. “Other bicyclists do not feel comfortable riding with or amongst motor vehicle traffic and they feel that some on-street bikeways do not provide sufficient separation from motor vehicles. While the County has developed many on-street bikeways in recent years, their distribution and connectedness across the Arlington is currently uneven.”

To that end, the updated plan calls for plenty of infrastructure improvements to meet that goal. The county’s budget squeeze, however, will make it a challenge for the County Board to find finding for many of these projects, at least in the near term.

But the document does identify several improvements that have already been funded in the county’s long-term construction plans, including three additions from the plan’s last update. Those include:

Shirlington Road Bridge – Reconstruct the Shirlington Road bridge, and adjacent sidewalks, to provide an enhanced, wide bicycle and pedestrian path along the west side of the roadway that links the W&OD and Four Mile Run trails.

As for the rest, some the new planned changes only impact small sections of trails or roadways, requiring only small funding commitments. Others are substantially more ambitious.

Among the bigger asks are requests for the renovation of the entirety of the W&OD Trail as it runs through Arlington, and the portion of the Four Mile Run Trail south of W. Glebe Road, totaling about 5.5 miles in all.

“Improvements may include: trail widening, minor realignments, new pavement markings, wayfinding signage and consideration of the addition of trail lighting,” the document reads.

When it comes to new and improved trails, other planned projects include upgrades for the entirety of the Bluemont Junction Trail and and the construction of a new, half-mile long bike and pedestrian trail connecting the site of the former Northern Virginia Community Hospital in Glencarlyn to the nearby Forest Hills neighborhood.

Some of the plan’s more substantial on-street projects include the construction of bike lanes and other improvements along “the entirety of S. George Mason Drive,” stretching about 2.1 miles in all. The document also envisions new bike lanes along N. Highland and N. Herndon streets, between Key Boulevard and 7th Street N., to allow for easier access to the Clarendon Metro station.

Additionally, the document recommends the creation of some new “bike boulevards,” or coordinated infrastructure improvements to give cyclists an alternative to bypass busy roads for quieter side streets.

The county’s previously constructed some off Columbia Pike, and the plan envisions one along the Rosslyn-Ballston corridor (on Key Boulevard, N. Jackson Street and 13th Street N. between N. Rhodes and N. Quincy streets) and another connecting Ashton Heights and Lyon Park (on 5th, 6th, 7th and N. Fillmore streets to connect Henderson Road to Pershing Drive as it meets Washington Blvd).

The county is planning an open house to collect in-person feedback on the new bicycle element on Jan. 14 at Phoenix Bikes (909 S. Dinwiddie Street), set to run from 6-7:30 p.m.