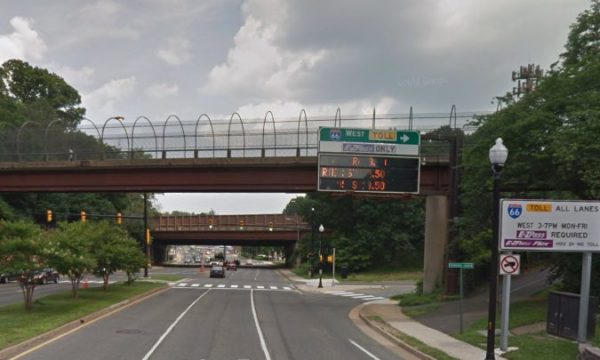 Arlington is gearing up to ask for millions in I-66 toll revenue to fund a series of changes along Lee Highway, including the creation of a dedicated bus and HOV lane along the road during rush hours.

The County Board is set to sign off this weekend on funding requests for six transportation projects, totaling $6.9 million, four of which focus on reducing traffic along Lee Highway as it runs from Rosslyn to East Falls Church.

The Northern Virginia Transportation Commission doles out a portion of the revenues collected through the year-old I-66 toll program to localities, in order to help afford road improvements along the corridor inside the Beltway. Accordingly, Arlington is looking for cash for the following efforts along Lee Highway, per a county staff report:

This project will increase morning peak hour frequency and provide running time improvements for better on-time performance on the subject Metrobus route that connects the East Falls Church Metrorail Station with the Farragut Square and McPherson Square areas in the District of Columbia via Lee Highway and a short section of I-66 from Rosslyn to the Theodore Roosevelt Bridge.

This project will add a second left turn lane from northbound Lee Highway to westbound Washington Boulevard and provide pedestrian improvements at the intersection north of the bridge over I-66, which is 0.25 miles from the East Falls Church Metrorail Station.

This project will install forward looking infrared (FLIR) video cameras at key intersections along Lee Highway. FLIR technology uses thermographic cameras that improve the accuracy of vehicle, pedestrian, and bicycle detection in all lighting and weather conditions, and in turn improve optimal signal, intersection, and corridor operations and performance.

The final project on the list is one that the county initially considered back in 2016 as an effort to prepare for Metro’s “SafeTrack” schedule disruptions, and the new lane would’ve run from Court House to Rosslyn. However, county transportation spokesman Eric Balliet says that lane was never constructed, and the new proposal calls for it to run from Cherrydale to Rosslyn instead.

The county expects a new lane would be particularly impactful along that section of the highway because about “25 loaded buses per hour” drive along it during peak period, and they often run into heavy delays near the highway’s intersection with N. Lynn Street in Rosslyn, according to the report.

In addition to the Lee Highway changes, officials are also hoping to earn $750,000 to add a new traffic light to the Washington Blvd entrance to the East Falls Church Metro station, as well as crosswalks and other pedestrian improvements at the intersection.

Finally, the county plans to ask for a total of $1.3 million over the next three years for “enhanced transportation demand management outreach” along the corridor, educating commuters about public transit and other strategies for getting cars off the road.

The Board is set to approve these funding requests at its meeting on Saturday (Dec. 15), and the NVTC will accept applications through Jan. 16. The organization plans to hand out $20 million in funding across the region through the program next year.

END_OF_DOCUMENT_TOKEN_TO_BE_REPLACED

More Stories
Healthy Paws: Can I Catch Toxoplasmosis From My Pet?Chick-fil-A in Ballston Quarter Starts Serving Up Sandwiches Today