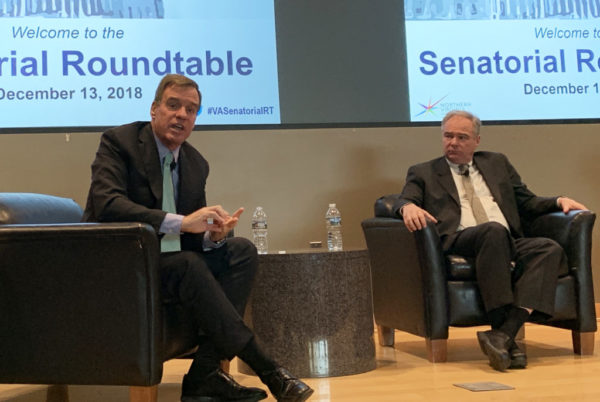 Sen. Mark Warner (D-Va.) has never been much of a fan of the name “Crystal City.”

As a longtime Alexandria resident, the state’s senior senator has had to spend plenty of time in and around the Arlington neighborhood that will soon become home to Amazon’s vaunted new headquarters, all the while rolling his eyes at its moniker.

“I’m not sure ‘National Landing’ should be the name, but I’d be so glad to get rid of ‘Crystal City,'” Warner quipped Thursday (Dec. 13) at a roundtable discussion hosted at George Mason University’s Virginia Square campus.

Luckily, his colleague on stage, Sen. Tim Kaine (D-Va.), had an alternative suggestion for the Crystal City-Pentagon City-Potomac Yard corridor ready to go: “Warner Plaza,” he said, prompting a round of laughter from the crowd of Northern Virginia business leaders and politicians.

That light-hearted banter aside, both senators acknowledged that the county will soon face far more dire problems than just naming its neighborhoods. Kaine and Warner both see Amazon’s impending arrival as a huge net positive for the county, and the state as a whole, but they also expressed a desire to take some action to help address the thorny issue of affordable housing in the area.

The program is designed to incentivize affordable development, and Kaine teamed up with Democrats and Republicans alike to introduce a bill last year expanding its funding by 50 percent. His office estimates it would create or preserve 1.3 million affordable homes over the next decade, about 400,000 more than would be possible under the program’s current funding levels.

“We don’t have to recreate the wheel,” Kaine said. “We can take things that work and do more of them. It’s already a good program to create workforce housing, but we can do more of it.”

Considering the county’s challenges finding cash for its own affordable housing loan fund, more help from the feds would likely come as quite welcome news indeed for Arlington leaders. But, despite its bipartisan support, Kaine’s legislation on the subject has yet to make any progress.

Warner envisions a more local approach to the matter. While the state already has its own housing development authority, which is set to pour tens of millions more into affordable housing initiatives as part of Gov. Ralph Northam’s proposed deal with Amazon, Warner thinks the area’s localities could stand to team up as well.

“I think there needs to be work done on a regional housing authority to make sure there will be affordable housing, and make sure people don’t get pushed out of their homes,” Warner said.

Warner does expect, however, that Congress can help out by ensuring stable federal funding for Metro in 2019.

Though the rail service did manage to score its first dedicated revenue stream this year, thanks to commitments from Virginia, Maryland and D.C. lawmakers, it remains subject to the whims of Congress for another $150 million or so in cash each year. And with Amazon bringing thousands of workers to the area, many of whom will likely rely on the Blue and Yellow lines to reach the offices, Metro’s health has been a key focus as officials look to prepare for the company’s arrival.

As Democrats prepare to assume control of the House of Representatives, Warner fully expects the “odds and leverage [for more Metro funding] will go up” next year. But that doesn’t mean he’s counting on adding more federal funds for the service, either, considering that Republicans still control most levers of power in D.C.

“I would love to say we could plus up that number, but I don’t think that’s in the cards with this Senate and this president,” Warner said. “But if we can get $150 million again, let’s take the money and run.”

Beyond the housing and transportation challenges Amazon may well exacerbate in the area, Warner echoed the views of his colleagues around the state that the new headquarters will be a “game changer” for the region.

With such high office vacancy rates even in a prosperous part of the state like Arlington, Warner says the region had a “level of vulnerability that I’m not sure the whole business community appreciated” before Amazon tabbed Arlington. Of course, he hopes that that tech company doesn’t simply bring prosperity for Northern Virginia when it gets here.

“I know it’s a little bit of heresy to say with an Arlington crowd, but I hope to find some Amazon contractors and partners to put jobs downstate too,” Warner said. “As the commonwealth makes a substantial investment, an investment that is about one quarter per job what New York overpaid for, by the way, we need to show that it will benefit the whole commonwealth.”